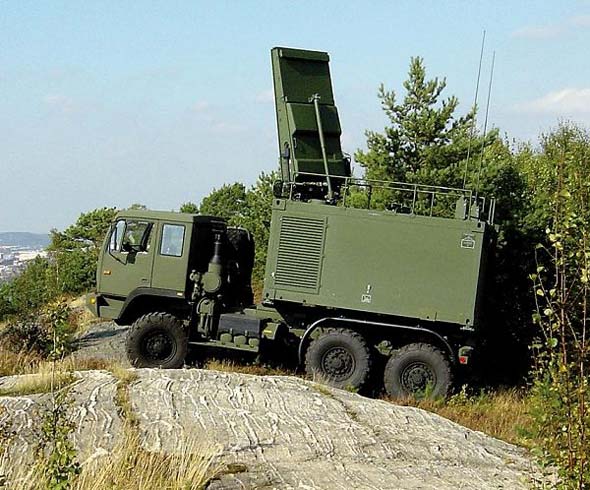 The Artillery Hunting Radar (ARTHUR) Weapon Location System (WLS) was developed by Erricson Microwave Systems, which has been acquired in 2006 by the Swedish Saab group. The system provides ground units with early warning and accurate location of hostile artillery fires. The radar is effective at ranges up to 40 km, where it can detect small size targets.

Within a few seconds of the initial detection, the system plots the launch site for counter-fire, and predicts the point of impact, to alert ground troops which could be endangered by the attack. A number of targets can be tracked simultaneously while search continues. After tracking, the launching position is determined and data on located batteries are transmitted on a data link to the artillery Fire Direction Centre.

The ARTHUR system can rapidly be air lifted by C-130 and helicopters, making ARTHUR the leading weapon locating system for light forces and Peace Support Operations. Originally the system was installed in a cabin carried by a Hägglunds Bv 206 articulated tracked vehicle. The present version is an ISO-cornered container that can be carried by any cross-country truck with a 5 ton payload.

The ARTHUR WLS also provides adjustment data for own artillery. In this mode, projectiles are tracked through the final part of their trajectory and the impact point is determined. The adjustment data and weapon locating modes can operate simultaneously. Special features are introduced to support peacekeeping operations, providing force protection, by detection of hostile fire and registering artillery fire in violation of the peace accords.

Norway and Sweden have developed ARTHUR in collaboration and fielded the system on BV-206 vehicles in 1999. The system is also operational with Denmark, Greece, the Czech Republic and the British Royal Marines, which use the system as the “Mobile Artillery Monitoring Battlefield Radar program (MAMBA)” systems. Systems have also been leased to Canada and Italy in support of peacekeeping operations. Most recently, on December 2006, Spain ordered ARTHUR systems as part of a €59 Million (U.S. $78 million) order.