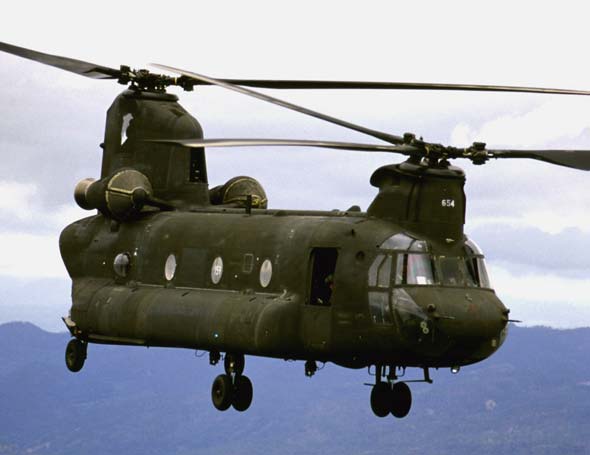 First production Boeing CH-47F Chinook helicopter successfully completed its first flight on Oct. 23. Boeing will deliver the new CH-47F to the U.S. Army for operational testing before being deployed in 2007. CH-47F uses the same cockpit as the MH-47G operated by the Special Operations Command. It will also be used in the HH-47 which Boeing is proposing to the U.S. Air Force’s Combat Search and Rescue program.

In December 2006 Boeing was awarded over US$1.5 Billion for the remanufacturing and new construction of up to 66 Chinook CH-47F helicopters. Over $624 million will be allocated for modification and ‘remanufacturing’ of nine Chinooks into CH-47F standard and construction of 16 new helicopters to be delivered within a year (early 2008). Additional $920 Million are allocated for options for remanufacturing of 19 and production of 22 additional new helicopters. Following the successful completion of U.S. Army acceptance and developmental flight testing in December 2006, the first production Boeing (BA) CH-47F Chinook helicopter has moved in February 2007, to the Operational Testing (OT) phase at Ft. Campbell, Ky. The flight tests will be conducted by Bravo Company, 7th Battalion, 101st Aviation Regiment, 159th Combat Aviation Brigade, 101st Airborne Division (Air Assault). The Army plans to field the first of 452 CH-47F helicopters in July 2007.

In February 2007 The Defence Materiel Organization of the Dutch Ministry of Defense ordered six new-build CH-47F (NL) Chinook helicopters from the Boeing Company [NYSE: BA]. These Netherlands-unique version helicopters will offer advanced avionics, improved situational awareness and survivability features and special operations equipment. The aircraft will be delivered between July 2009 and January 2010. Their advanced cockpit avionics suite will be based on Honeywell’s Avionics Control and Management System (ACMS), an integrated forward-looking infrared capability and several other newly developed multi-mission features. The RNLAF Chinook fleet serves with the 298 Squadron based at Soesterberg Air Force Base and supports the Dutch Air Mobile Brigade, operated within NATO.