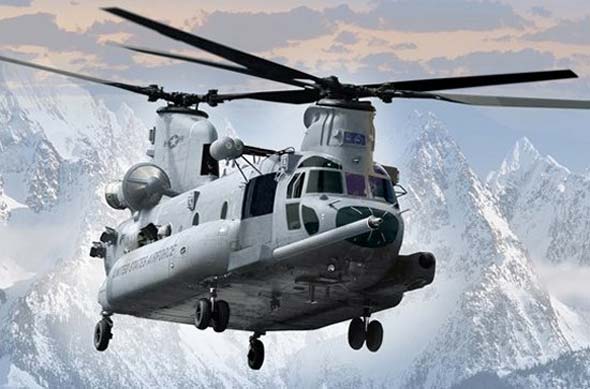 On November 9th 2006 the US Air Force selected a new version of the Boeing’s Chinook helicopter for the future Combat Search and Rescue (CSAR) helicopter. Boeing is expected to build 145 of the new Chinooks, to be designated HH-47. The new helicopter will replace the HH-60G (Pave Hawk) helicopters which are quickly approaching their useful service life limit, adding much needed endurance and load capacity for extended operations.

The CSAR program calls for initial operational capability of the HH-47 aircraft in 2012. Under the program, which is valued at up to $10 billion, Boeing will build 141 production aircraft and four test aircraft. Chinook helicopters are already serving with the US Special Operations Command (MH-47G) and US Army (CH-47F). The new helicopter will be designed to deploy quickly and to operate out of austere locations worldwide. The combat search and rescue mission requires the helicopter to operate in the day or night during adverse weather conditions and in a variety of spectrums of warfare to include nuclear, biological and chemical environments. CSAR specific mission equipment should include all-weather navigation equipment and systems for the location of personnel, including special-forces and downed pilots. On-board defensive capabilities will include armor protection, electronic countermeasures, and machine-guns permitting the helicopter to operate and survive in a higher threat environment than current systems.