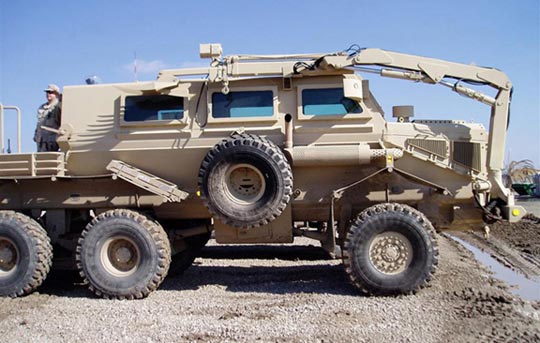 The Buffalo heavily armored EOD vehicle follows the South African monocoque capsule protection concept with US manufactured automotive platform, offering protection from IEDs and up to 45 pound landmine explosion under any wheel and 30 pound mine explosion under the centerline protection. An upgrade package offers protection from Self Forged Fragmentation (SFF) mines. The vehicle is used with US forces in Iraq for route clearing and counter IED activities. Since their deployment to Iraq in 2003 the Cougar and Buffalo vehicles employed with explosive ordnance disposal teams and engineers units have taken about 1,000 IED hits without a loss of life, said Wayne Phillips, a company vice president in charge of Marine Corps programs.

The Buffalo uses steel wheels and disc rollers which allow the vehicle to be driven over and detonate anti-personnel mines without sustaining damage. As a result, unusually large numbers of mines can be neutralized in a short period of time. The vehicle retains all round (including roof) ballistic protection from 7.62mm NATO ball cartridges. This armor is upgradeable to protect against Dragunov AP cartridges. In a recent incident that involved a Buffalo vehicle which ran over an anti-tank mine, the blast tore off a wheel and destroyed an axle on the vehicle. There were no casualties to the crew inside the Buffalo and the vehicle maintained its mobility and drove itself out of the minefield. It was repaired overnight and was back in operation the following day.

14 Buffalos are currently in service with US Army in Iraq and Afghanistan. Additional 21 vehicles were  purchased by the Army in  May 2004, at a cost of $15.3 million with deliveries planned for completed by December 2004. The US Army ordered 15 additional Buffalos in November 2004, under a separate 11.8 million contract. On February 7, 2006 Force Protection announced a new order from the US Army Tank-automotive and Armaments Command, for 19 Buffalo mine clearance vehicles, with options for 27 more. Differing from other EOD vehicles, The heavily protected Buffalo is a central element in the US Army’s counter-IED ‘hunter-killer’ concept. that protects convoys against the threat of mines and IEDs. enables engineers to inspect suspected objects from safe distance, using the robotic arm and video cameras, operated from the relative safety of the protected cabin. large windows of armored glass provide good visibility to the sides of the vehicle, to enable effective operation on route patrols and dealing with suspected IEDs.

On November 9th, 2006 the US Marine Corps will soon get 200 additional Cougar Joint EOD Rapid Response Vehicles (JERRV)and 80 Buffalo mine protected explosive devices clearance vehicles. The total contract worth is estimated at $214 million.