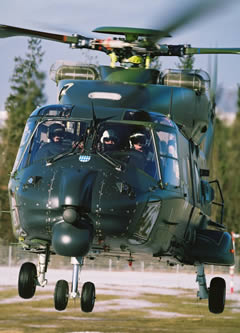 Following the qualification of the helicopter by NATO HElicopter Management Agency (NAHEMA) on March 31st this year the German type certification was granted on December 1st, 2006, clearing the way for deliveries to the German Army and international customers.

Until the end of 2007, 14 aircraft will be delivered. The NH90 program acquired a backlog of 500 aircraft (400 firm orders plus options for additional 100) from Germany, France, Italy, the Netherlands, Portugal, Finland, Norway, Sweden, Greece, Oman, Australia and New Zealand. Negotiations are proceeding with Spain and Belgium about respectively 45 and 10 additional TTH.