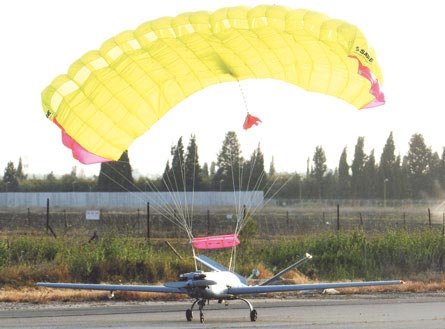 The I-View family of small and mini-UAVs will be deployed with brigade, battalion level and special operations forces. This family has three members – K250, designed for brigades, K125 designed for battalions and K50, optimized for Special Forces. All I-View models are designed for mission endurance of several hours and operate at an altitude below 15,000 above ground level. I-View is designed specifically for the forward echelon. While larger UAVs, such as the Searcher and Heron, are operated at theater level, in support of strategic operations, the new mini-UAV family requires less support, has a smaller logistical and operational footprint and offers direct support to the commanders and users.

With maximum takeoff weight of 240 kg, I-View can carry high performance sensors such as the MOSP optical payload and Synthetic Aperture Radar (Such as the EL/M-2055D). Due to the larger and improved optics and stabilization, MOSP offers 30 – 40% improved performance compared to smaller, lighter payloads such as the POP 300. To further improve the performance of the payload, I-View uses an automatic target tracker, implemented in software the ground station. Malat’s new miniaturized avionics are already installed in the I-View, contributing to weight and space saving. A total capacity of 86 liters is available for payloads and mission specific instrumentation systems.

I-View can operate on 6 – 8 hour missions, at altitude of 15,000 feet. At such altitude, its line-of-sight communication datalink can operate at ranges of 150km from the ground station. When operation at lower altitude is required, the UAV can be supported by another vehicle carrying an aerial relay. I-View can utilize the common mission control systems used by other UAVs such as the Heron and Searcher. A miniaturized version is available for rapid deployments, packed in a Humvee mounted shelter.

I-View’s operational autonomy, with automatic launching and recovery, and efficient mission control facilities, offers self sufficiency for the tactical units. The system can be deployed almost anywhere, either from paved runways or by hydraulic rail launcher. Rapid tear-down ensures the unit does not slow down the troops, can move at the pace of the battalions, and may not become target for enemy attack. I-View uses a unique controlled parafoil flight termination system, which is automatically deployed at the end of the mission or on emergency, to bring air-vehicle to the ground through a soft landing. Since the parafoil decent is controlled by the flight controls of the UAV, I-View can be landed within 50 m radius from the predestinated point, regardless of the wind conditions. This controlled parafoil automatic landing system is considered to be the most suitable for tactical UAV operations. Since landing loads are minimal, the aircraft can be reused after minimal turnaround time of few minutes. I-View uses the operationally proven automatic takeoff and landing systems available in the Heron, Hunter and Searcher UAVs.

The aerodynamic design is optimized for parafoil integration. The parafoil is stored in a tail boom which opens straight into the air stream. Unlike most UAVs using pusher propeller, I-View’s engine and propeller are mounted in front, to prevent the risk of parachute failure. Another distinctive design feature is the dove tail design is already well proven in UAV operation. The upper tail chosen for the I-View maintains all the benefits of this design, with improved payload visibility, and safety during takeoff and landing. While dove-tail is more efficient, it also lacks the redundancy of the twin-tail design. IAI’s tradeoff in the I-View was the availability of the parafoil, which can be used as emergency landing device.

The launch customer of the I-View will probably be Australia. The Australian MOD selected this platform for its future tactical UAV system, a $145 million program announced by Defence Minister Robert Hill December 12, 2005. A formal contract was signed a year later, in December 2006. According to the Australian MOD, Boeing Australia, teamed with IAI / Malat was selected to supply UAVs for the Australian Army’s Joint Project 129 (JP129). The first I-View will be operational in 2008 by a new regiment based at the Gallipoli Barracks, Enoggera, in Queensland. They Australian Army is already operating short-range, miniature SKYLARK UAVs supplied by Elbit Systems. These mini UAVs  are being deployed to Iraq. Additional, High Altitude Long Endurance Maritime UAV (Most likely the Northrop Grumman Global Hawk) will also be purchased under Project Air 7000.

I-View in also a contender in several other programs in Israel, India and other markets.

Facing continuous delays, the Australian Government decided to terminate the contract and announced its desicion On September 4, 2008.