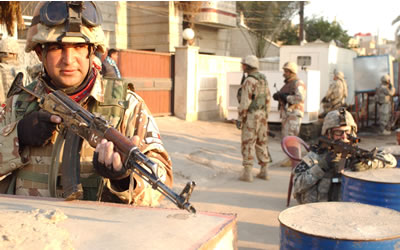 In his pre-war planning, President George Walker Bush, his political and military advisors have refused to rise to the challenge of reality by ignoring the facts on the ground. In order to achieve any success in Operation Iraqi Freedom, the US should have regarded the Iraqi scene, not as it was in the past, nor as Washington’s decision makers hoped that it would shape up to their expectations. Having been blind to these realities, which were widely known to Middle East scholars, Bush and his compatriots made one blunder after the other placing US forces, in a predicament, which can hardly be set right now, by what is regarded too little and too late to have any effect to solve, what appears as an impossible situation.

Judging by what is said and done, in Washington, it seems quite obvious that American people do not fully comprehend the complex dynamics of this sectarian war. The present surge in troops, regarded as a desperate move, will only increase the United States’ failures in Iraq, while certainly deepen the sectarian divides in the already war-fractured country, leading inevitably to more bloodshed. The new plan seems to be based on even more of the past strategems, depending on a weak Iraqi government to fulfill promises it has repeatedly broken, to take on sectarian militias, ending political squabbles. Calling on to beef up efforts in Baghdad to help quell raging violence, Al-Maliki has pledged to deploy more Iraqi forces to stabilize Baghdad But as the Iraqi military has been a recruiting ground for militias and death squads, based on past experience, it seems highly unlikely, that the Iraqi government will be able to fulfil its commitments now, nor in the near future.

In fact, no matter what the strategists in Washington believe, it is crystal clear that America is no longer in the driving seat here. It has virtually lost Iraq and adding a few thousands troops is not going to make significant difference, because the situation is already too far beyond fixing. Even if the entire order of battle of the United States military will be deployed, under the present and forseen circumstances, the US can hardly expect to forge and restore a new united Iraqi national entity, which will live in peace and harmony under a democratic regime, which President Bush has hoped for, when he set out to fight his “Iraqi Freedom” war.

Still, the biggest danger to US forces in Iraq, does not represent the new “Battle for Baghdad” to which the Pentagon is now dispatching the new 21,000 man troop contingent. Iran will not admit this publicly, but Tehran views keeping as many American troops as possible bogged down in Iraq and especially in Baghdad, as long as it takes, to strengthen its own strategic position in the region. While Iraq is convulsed by a brutal civil war between Shiite and Sunni Muslims, its central government being weak, Mahmoud Ahmadinejad and Tehran’s radical Shiite clerics are waiting on the sidelines only to take advantage of US political and military dilemma until the timing is right to strike on the US’ most sensitive jugular.

Bush’s offensive against Muqtada al-Sadr, which almost certainly will bring down the Maliki government; will turn Baghdad into another Sarajevo and tempt Iran to take the advantage of Iraq’s power vacuum to annex Iraq’s huge oil fields at Basrah province. In control of this highly strategic area, US forces will have to mount a powerful counterstrike in order to evict the Iranians from their hold, before they can consolidate their position.

In order to maintain the only logistical land line from Kuwait into Iraq, Basrah is not only a highly strategic area, but irreplaceable, if the US Army logistical lifeline remain secure. However, should Iran implement its ambition to control Basrah province, it will become operationally imperative to shift large forces from the Baghdad area southward into this new combat zone. Such a move will inevitably leaving Baghdad once more prone to an even more brutal sectarian bloodbath in the city.

No doubt, Baghdad would bear the brunt of the political and military shock of Maliki’s downfall. Muqtada al-Sadr’s Shiite Mahdi Army is based in eastern Baghdad. Iran’s own Shiite militia in Iraq, the Badr Brigade, which dominates the high command of Iraq’s army and police, is also based in Baghdad. Finally, the Sunni “ultras” including Al-Qaeda have a strong presence in western Baghdad. These three factions would certainly battle for full control of Baghdad city, block by block.

Moreover, a new US military in surge in Baghdad, could not only wind up strengthening the power of the anti-American Sadr, who is actively backed by Tehran, but accelerate hastening the creation of a radical, al Qaeda supported, Sunnistan in al Anbar. As the civil strife worsens, Iraq’s neighbors – like Sunni Saudi Arabia and Jordan and others in the region- would feel compelled to give their Iraqi co-religionist Sunnis more active support, which would mean further military involvement, getting out of control by insurgents. Iraq’s civil war could quickly escalate into a regional Sunni-Shia conflict, with catastrophic consequences.

Saddam’s execution, identified as a Shiite revenge move, precisely on the dawn of the holiest day in the Muslim calendar has already electrified the Sunni Arab world and echoed the Sunni-Shiite sectarian struggle that is tearing Iraq asunder. There are first signs of a new “inter-Sunni” conflict in the Gaza Strip, where Sunni Fatah activists even accuse Hamas being so-called “Shiite vassals” fighting in the name of the Tehran clerics in an inter-Palestinian civil war. The American plan asking that Iraqis agree to a program of national reconciliation, changes in the constitution to protect Sunni interests, and an oil law that would share revenues equitably- is nothing but sheer wishful thinking.

Unfortunately, Washington’s policy makers are persisting desperately to cling to the illusion of an Iraqi unity. President Bush’s hopes for success in Iraq are still depending on two, erroneous pillars: Prime Minister al-Maliki’s national-unity government and the establishment of security forces that are trusted and respected by all Iraqis .Regrettably, reality on the ground, proves quite different.

The new Iraqi army, is divided along sectarian lines and is therefore largely ineffective. The US, having introduced a Shiite majority government, inevitably brought about a Shiite dominated military and police force, almost criminally underestimating the sectarian prism, under which Iraq is divided into highly volatile sectarian units. By unseating Saddam Hussein and his decades-long iron rule of a Sunni overlords administration, the US made its biggest mistake by disbanding the regular Iraqi armed forces, largely officered by professional Sunnis, without immediately establishing an effectively functioning replacement, which could be favorably accepted by the public throughout Iraq. In fact, what worries the Sunni minority most, at this stage, is being left to fend for themselves against the Shiites, out for bloody revenge over years of brutal segregation by the Sadadm’s Sunni rule. This very fear, will no doubt fuel their determination to fight against, what they regard a hostile, even life threatening regime, supported by an outside power of infidels.

Recently Prime Minister Nuri al-Maliki said, “cheek in tongue” when asked how to subdue the current bloodshed in Baghdad: ” Let my troops to their own devices and in six months there will be no further insurgence in Baghdad”. Analysts warn, that if the new Bush plan will actually sanction such a move, Shia will crush the Sunni in a horrible blood bath, with strongest repercussion throughout the Arab world, no doubt, blaming American irresponsible incompetence again.