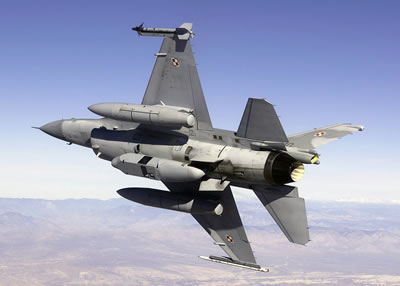 Goodrich Corporation’s (NYSE: GR) new reconnaissance pod has successfully completed flight testing as part of the F-16 Poland Peace Sky program. Testing was conducted recently at Edwards Air Force Base, Calif. The Goodrich DB-110 reconnaissance pod is carried on the F-16’s centerline station and is controlled by the pilot using a cockpit Multifunction Display (MFD). The pilot has the ability to: collect imagery automatically via a pre- programmed mission plan; edit the plan; view imagery in the cockpit; and command the pod to collect targets of opportunity.

According to Tom Bergeron, General Manager and Vice-President of Goodrich’s Surveillance and Reconnaissance Systems business, the DB-110 system is already integrated and tested on other aircraft such as the Tornado, F-4, F-15 and P-3, offering a unique, low-risk solution.” Goodrich was selected by the Polish Air Force to supply seven DB-110 reconnaissance pods with fixed and mobile ground stations.

The Goodrich DB-110 is already in service with NATO, being operated on the U.K. Royal Air Force Tornado aircraft in the RAPTOR pod (Reconnaissance Airborne Pod for Tornado). Providing three different fields-of-view in a single pod, the DB-110 system can be operated at low, medium and high altitudes by day and by night. This pod also incorporates the NATO Common Data Link system, allowing operators on the ground to receive imagery in real-time from the aircraft for immediate exploitation and analysis.