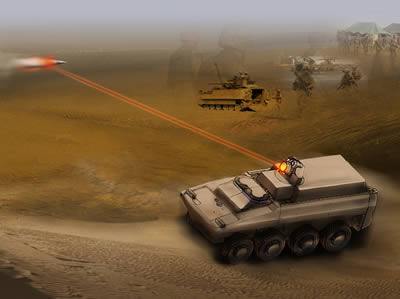 Northrop Grumman is working on a high power, solid-state ‘electric’ powered laser developed under phase 3 of the Joint High-Power Solid State Laser (JHPSSL) program. The new high power laser is developed at the newly established specialized facility exclusively for system integration and production of high-energy laser systems for military uses – the first of its kind by private industry in the United States. Located at the Space Technology sector’s Space Park campus, the Directed Energy Production Facility is specifically designed for the production of high-energy, solid-state lasers and their integration onto military vehicles.

When completed next year (2008) the new laser will demonstrate 100 kW solid-state lasers with power sufficient for a variety of force protection battlefield and precision strike missions. This system will be followed by future technologies of lasers including fiber lasers even more powerful than 100kW. The facility will also handle the integration of electric lasers onto various military platforms, such as armored combat vehicles. Another system to be developed at the new facility is the Skyguard high power chemical laser system, designed to protect civilian, strategic and military targets from rockets, artillery and mortar (RAM) attacks. Northrop said it obtained US government permission to market the system overseas, and has already proposed the system to Israel. Northrop is one of four to five bidders proposing the Israeli MoD with counter-rocket solutions.