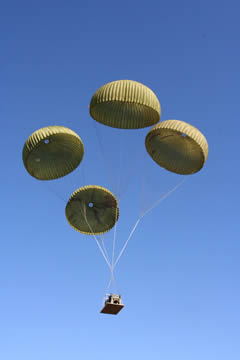 Special Forces, airborne and air assault units have always relied on all-terrain vehicles to provide mobility and carry some of the heavier loads to support the troops on the ground. These vehicles provide high mobility over rough terrain but rarely have armor protection due to the weight penalty of the armor. New vehicle designs introduced at Eurosatory 06 displayed new capabilities in this field.

The Panhard A3 VPS all terrain vehicle is designed to fit into the confined space of CH-53 and NH90 helicopters. This vehicle was selected to equip the 11th parachute Brigade of the French Army, which operates 250 A3F vehicles. A3 is available in 15 versions. The basic platform hauls a 700 kg payload and carries four soldiers. The A3L can carry 900 kg and six soldiers. Both vehicles are powered by a turbo diesel engine, allowing speeds of up to 130 km/h, with a traveling range up to 700 km. Forty vehicles VPS vehicles were ordered for the French Special Forces in 2005. At maximum loading the VPS can carry a payload of 1.2 tons. It has an inherent protection against anti-personnel mines by an integral armored floor. VPS is fitted with slinging rings for rapid deployment by parachute or air. It is designed for long missions in extreme climate conditions. 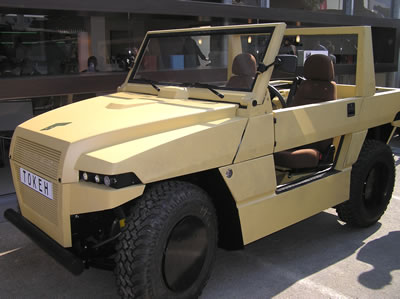 A different design is the TOKEH, a concept vehicle developed by Rheinmetall Defense. This light tactical vehicle is optimized for internal carriage in an NH-90 helicopters, in support of special operations. It has accommodations for a driver and commander, with an optional third seat. It is a high mobility vehicle with a maximum gross weight of 2.4 ton, including a payload of up to 600 kg. and limited frontal protection.

The Pinzgauer, in service with the British elite and Special Forces, are designed to fit inside a C-130, CH-47 Chinook or MV-22 Osprey, or slung carried by most heavy helicopters. The British (Supacat) designed and manufactured by the British HMT Vehicles company, recently acquired by Lockheed Martin, is offering another air-mobile Tactical Wheeled Vehicles designated LM4x4 and 6×6. This light truck is designed to offer high off-road mobility, enabling it to keep pace with tracked vehicles. The Supacat is provided in armored or standard non-armored, which are transportable with CH-47, CH-53 and MV-22 or C-130 aircraft. Lockheed Martin plans on incorporating HMT’s designs into its vehicles for U.S. programs such as the Lightweight Prime Mover program and the U.S. Army’s Future Tactical Truck System (FTTS).

The armored version of the new Renault Defense Trucks Sherpa 3A is based on the air transportable Sherpa 3 all-terrain platform, with a gross total weight of 12.5 tons. It is equipped with a fully protected hull, which conforms to N2 ballistic protection level and N1 mine protection level. The utility truck version, called Sherpa 3, (12.5 Ton GTW) can carry a total load of 4.5 tons, including a driver and passenger. 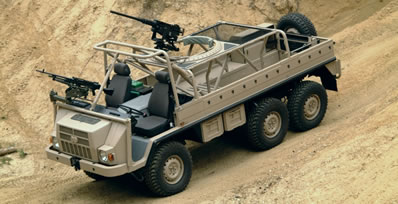