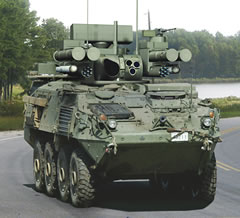 A new concept, first introduced at last year’s DSEI by Thales, was the THOR multi-mission vehicle. Interest in this vehicle type is increasing as could be seen by the number of new designs presented at Eurosatory this year. The multi-mission concept enables a single vehicle to undertake several different missions depending on weapons fit, such as air defense, anti-tank, precision attack, bunker buster and self defense. The implementation calls for the integration of powerful optronics for intelligence gathering and target acquisition, and the use of modular or multi-mission launcher, which can fit several types of weapons, such as anti-aircraft, anti-tank / multi-purpose guided weapons and guns for direct fire.

This concept was first introduced in combat by the Israeli Army, when they employed the M-163 Vulcan as a fire support element in urban combat during the Lebanese conflict and later in urban combat during the Intifada. The Russians took this concept a step further, by developing the Tank Support Vehicle based on lessons learned during their military actions in Chechnya. With the introduction of multi-purpose guided weapons such as the Hellfire, Spike and Milan families, the concept migrated to the west.

At Eurosatory, several versions of Multi-Purpose platforms were introduced, including the Canadian MMEV, the French MPVC, which was developed by MBDA and the Avenger Multi-Role Weapon System (AMWS) by Boeing.