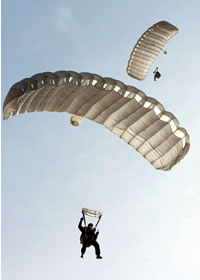 Airborne Systems Group demonstrated new parachute delivery systems during the company’s “Airborne Days” demonstration event. Among the highlights were the Advanced Tactical Parachute System (ATPS) slated to replace the US Army’s aging T-10 series non-steerable troop parachutes in use since the 1950’s. ATPS is designed for improved safety, by reducing the rate of descent by 25 percent from 22 feet per second with the T-10 to an average rate of descent of 18 feet per second for a 385lbs Total Jumper Weight. Consequently, the decline in rate of descent will reduce the impact energy by almost 40% to lessen the potential for injury. It has a newly redesigned reserve parachute and an integrated harness system more adaptable for use by a wide range of jumpers (fifth percentile to the 95th percentile soldier).

Airborne is offering a new family of GPS guided autonomous parachute delivery systems known as Joint Precision Aerial Delivery System (JPADS). Airborne developed these products as a family of platforms, with varying weights and sizes using the same software platform. With this “family” approach, the user interface on the autonomous guidance units and the mission planer are identical across the various models of “smart” cargo delivery products. Demonstrations were provided for the ARK (Aerial Rescue Kit) and SPARK (Small Pack Rescue Kit) which are the latest technologies used in aerial delivery rescue and survival equipment. 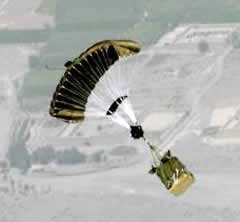