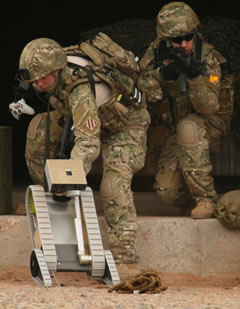 The exercise involved the Non-Line-of-Sight Launch System (NLOS-LS) which is a part of Spin-Out 1 scheduled to deploy with current force units by 2008. NLOS-LS gives the Army a highly deployable, long-range “precision attack on-demand” capability, with a much-reduced logistical footprint for faster and more sustainable deployments.

It was the first step in an accelerated process to mature key capabilities of the FCS program, in an attempt to deploy them to current force combat units. During the exercise a platoon of 36 Soldiers tested FCS systems in urban operations. Among the systems tested were urban and tactical unattended ground sensors (UGS). The unattended ground sensors are part of FCS spin-out 1. This phase also includes an early version of the FCS Network. Other systems tested included unmanned ground vehicles (UGV), designed to clear roads and buildings, as well as detect persons and objects that may enter a building occupied by Soldiers. Robotics and unmanned vehicles used to help clear buildings without risking warfighter’s lives.

Warfighters were equipped with the Future Force Warrior Individual Ground System (FFWIGS), enabling unit commanders and fellow Soldier to monitor the location and status of each combatant. Another advantage of the FFWIGS is the ability of the platoon leader and the platoon sergeant to locate all their Soldiers on their screen and communicate with them by radio.