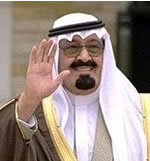 Just a little over a year has elapsed since Hamas won the controversial elections for the Palestinian parliament, but by the signing of the Mecca Agreement, it must now be celebrating its ultimate victory against all odds: The Saudi throne endorsed Ismail Haniyeh as Palestinian prime minister but any unity government to be established will from now on come under Saudi patronage. Money is no object either. The Saudi benefactor and its allies can funnel the Palestinian protectorate aid amounting to USD three billion every year without butting an eyelid. Their oil revenues last year alone, totaled some US$ 480 billion.

The most pressing goal in the Saudi Monarch’s sights was Haniyeh’s personal guarantee to scale down in stages the Iranian and Hezbollah presence in Gaza and nullify Mahmoud Ahmadinejad’s painstaking efforts, made last year to establish Tehran’s strategic Mediterranian outpost in Gaza “Hamastan”. King Abdullah bin Abdul Aziz al-Saud had groomed Ismail Haniyeh’s rise to the top of the Hamas’ leadership during his visit to Riyadh in the second half of January. In fact, Haniyeh seems to have made a shrewd bargaining move last December which certainly comes within the best traditions of Middle East Qasba haggling. His three-day visit to Tehran, during which he held high-profile meetings with top Iranian officials, including Iran’s supreme leader Ayatollah Ali Khamenei and President Mahmoud Ahmadinejad, offered Haniyeh more than he had ever dreamt of. In the words of one Palestinian observer, the Iranians treated Haniyeh like a second prodigal son (the first being Hezbollah). In a press conference at Tehran airport, the Palestinian prime minister, joyfully referred to Iran as now being “our strategic depth”.

The unexpected generosity of Shia Iran towards a Sunni Islamist movement like Hamas, should have been viewed as a rebuff and direct challenge not only to American hegemony in the region, but to Saudi Arabia which regards itself as protector of Sunni Islam. Naturally, Riyadh’s strategic move which followed was to lure Hamas away from Iran’s influence and bring it back into the Arab fold, in spite of the fact, that the United States views Hamas as a terrorist organization. Whether invited or not, Haniyeh’s next destination was Riyadh, where in a secret deal the elements of cooperation between the Saudi government and Hamas political leaders in Gaza were laid out. Whatever may be claimed against Ismail Haniyeh’s fundamentalist ideologies, his December trip must mark him as an excellent political manipulator! As it seems after all, Iran’s entry into the world of Palestinian funding has not transformed Hamas into a pro-Iranian group or one that is controlled by Tehran, but has given it a great deal of political room to maneuver and this Haniyeh has exploited with maximum effect. No doubt that the Saudi sponsored Mecca Agreement will establish an emboldened Hamas government in its negotiations with both Abu Mazen and Israel.

But Hamas will have to pick up a price tag which may not be cheap. First it is doubtful whether the Tehran clerics and especially Mahmoud Ahmadinejad will accept willingly to lose another of his strategic assets, having lost his forward base in Hezbollastan in Lebanon last summer. Under his orders Gaza might well explode once more into a new series of sectarian violence, aimed to destabilize any newly formed “unity government” between Hamas and Fatah.

There is enough sectarian tension and unfinnished business with local warlords and terrorist clans, which view such a government with suspicion. Moreover, Saudi Arabian influence into the Gaza strip will undoubtedly introduce a new danger to secular Palestine- Wahhabism, which no less extreme than Hezbollah or al Qaeda to nullify any future return to a dialogue with Israel or the West.

Wahhabism (also known as Salafism), is named after Muhammad ibn al Wahhab (1703-1792). The Wahhabis differ from traditional Sunnis in that they believe in the literal interpretation of the words of the prophet Mohammed. They are extremely puritanical and legalistic in matters of faith and religious practice. Wahhabism considers any modernism to be contrary to the Islamic faith. They reject any other branches of Islam and consider these heretics and killing them is not considered a sin.

Wahhabism is an expansionist sect intolerant of Shi‘ite Islam, Judaism, Christianity, and Hinduism; in fact, Wahhabists seek to challenge and destroy all these faiths. In essence, oil has been the tool that enables Saudi Wahhabi fanaticism to acquire petrodollars to use in activities aimed at undermining, attacking and ultimately subjugating the West. The Saudi-Wahhabi threat must not be underestimated by the delusion that the Saudi royal family is a moderating force within Saudi politics when the realty is that it has produced a well-funded launch pad for extreme ideologies. Indeed, Saudi Arabia and its militant Islamic doctrines constitute a clear and present danger to western societies and especially Israel.

The royal Saud’s relationship with Wahhabis is symbiotic. The rulers rely on the religious establishment for legitimacy and support, while the religious establishment relies on the government for maintaining and spreading its ideology. From time to time, however, this arrangement fails to work, when extreme fundamentalist elements, either Shi’ite or al Qaeda affiliated cause severe terrorist acts throughout Saudi Arabia.

Anywhere trouble is found, Wahhabism may thrive and the lawless Gaza strip with its armed chaos may be an ideal place for it. Hamas, as an extreme and relentless anti-Israel and anti-US element represents pure Wahhabism ideology and could become an ideal breeding ground for Wahhabi mosques, financed with Saudi petrodollars. Such a move will certainly not be tolerated by Hezbollah and al Qaeda, who have already established substantial influence in the Gaza Strip among the huge refugee population. But in the long run, Sunni Wahhabism, sponsored by Saudi Arabia, may well gain more public access than the Shi’ite Islam preachers of Hezbollah, or al Qaeda, which is still regarded as too dangerous by the majority of Palestinians.

But what worries the Saudi king is not Iran’s active involvement in Palestinian affairs, but rather the domino theory of Iranian influence: the concern that this is yet another political move, coming on top of its intervention in Iraq and Lebanon. The attention that Saudi Arabia is paying to the Palestine Authority, whether Hamas or Fatah, is seen primarily as a way of attempting to contain the Iranian domino effect. The Saudi mediation initiative is therefore viewed as one that must succeed, or challenge the ultimate test of Saudi prestige in the region, a situation which the Saudi royal household cannot tolerate.

From Israel’s point of view, the Mecca Agreement is certainly a worrisome development. The battle to hinder Hamas from gaining the world’s acceptance may well end in defeat, because even the Bush administration would not be able to reject an intra-Palestinian compromise agreement led by the Saudi king. American interests in Saudi Arabia are dominant. Riyadh is the third-largest supplier of oil to the US and no administration in Washington would dare reject the Mecca Agreement that the Saudi king is so proud of, even if there are officials, which regard such an agreement as misplaced and counter to Israel’s interest. But under the circumstances, it is clearly evident, that Israel can blame no one but its own shortsighted political leadership, which allowed the controversial January 2006 elections to be held at all, contrary to all forebodings and which brought Hamas to power.