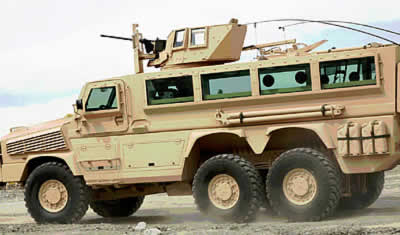 The first orders for large volume production MRAP vehicles were issued this week to BAE Systems and Force Dynamics. The two contracts, totaling over US$122 million are funding the production of the first 215 vehicles, representing approximately five percent of the expected total of all orders to be issued under the MRAP contracts. The vehicles will be delivered to U.S. services within the next four months. According to the U.S. Navy, which issued the orders, these Limited Rate Initial Production (LRIP) orders are being issued to accelerate the production of lower risk proposed vehicle material solutions in advance of testing and production orders.

BAE Systems (BA.L) has received an initial $55.4 million delivery order for 90 advanced tactical wheeled vehicles under the under the Mine Resistant Ambush Protected (MRAP) vehicle program. All vehicles will be based on the RG33 design. 75 will be 6×6 vehicles Joint Explosive Ordnance Disposal (EOD) Rapid Response Vehicle (JERRV) class II vehicle, designed for multi-mission operations such as convoy lead, troop transport, ambulance, explosive ordnance disposal and combat engineering. The remaining 4×4 vehicles compatible with the Mine Resistant Utility Vehicle (MRUV) urban combat vehicle requirement (Class I). The company will deliver the vehicles over four months, beginning March 2007.

Under a parallel award, Force Dynamics, the recently established joint venture between Force Protection, Inc. (NASDAQ: FRPT) and General Dynamics Land Systems, (NYSE:GD) received a $67.4 million contract to produce 125 MRAP vehicles. Of these vehicles, 65 will be Category I and 60 Category II vehicles, to be delivered within four months. “This joint venture was formed precisely for this purpose: to mobilize quickly on any action item announced by the Marines as the MRAP program moves forward.” Said Force Protection COO Raymond Pollard. “With advanced proprietary vehicle designs and significant manufacturing capacity, Force Dynamics has the capability to make an immediate and strategically important impact on the war on terror while establishing itself as a leader in the U.S. defense industry. We look forward to further supporting this program as it issues future contracts.”