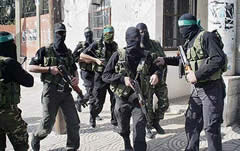 The bloody Gaza Strip once more became the scene of brutal fighting Monday, which reached its climax with a massive attack by Hamas on major Fatah security installations, threatening to take full control of the strip against President Abu Mazen’s forces.

According to reports by Haaretz’ veteran Arab affairs reporter Avi Issacharov, Hamas militants turned Shifa Hospital in Gaza City, and Beit Hanun in the northern Strip, into barricaded military positions as members of two clans, Bakar and al-Masri, who arrived at the scene mostly to avenge the deaths of their Fatah-affiliated family members, targeted the hospital with gunfire and mortars and went as far as to execute the wounded.

Only hours after an Egyptian brokered cease-fire collapsed, the fighting escalated into more brutality between the factions, with no quarter asked nor given. People were thrown out of fifteen story windows into the street, others gunned down in their homes, as Fatah and Hamas struggled with each other for control of the Gaza streets. In vain, President Mahmud Abbas (Abu Mazen), called for calm – the carnage continued relentless gaining momentum from hour to hour in its intesity. Monday afternoon, reports circulated over Hamas having already gained control in most of the northern Gaza Strip, from where the Qassams rockets are frequently launched against teh Israeli border town of Shderot. Earlier Monday, Hamas gunmen killed Fatah intelligence officer Yasser Bakar, and his 16-year old brother. The incident prompted members of his family to launch a revenge shooting spree. Two members of Hamas, barricaded inside Gaza’s biggest hospital, Shifa, were killed during the melee.

At about the same time a senior Fatah Official named Jamal Abu-Jedian, was assassinated brutally, hit by no less than 45 bullets, by Hamas gunmen near his Gaza home. Abu-Jedian was a close associate of Mohammed Dahlan, the Fatah strongman and security adviser to Palestinian Authority Chairman Mahmoud Abbas, who was lately hospitalized in Cairo for an operation, and is still not back in the Strip, reports believe. As result, Fatah militias, the Al Aqsa Martyr’s brigades called their people to go and fight in revenge for a last stand in control of the streets.

A most dangerous development is foreboding already late Monday, when Fatah’s military wing, the Al-Aqsa Martyr’s Brigades, threatened for its part to expand the fighting to the West Bank by announcing it would kill Hamas officials there unless the organization ceased its attacks. Should this move happen to materialize, a clash with the IDF cannot be ruled out, escalating into further bloodshed.

Meanwhile, the factional violence continued unabated Tuesday with an attack by Fatah gunmen on the home of Palestinian Prime Minister Ismail Haniyeh of Hamas. Hamas branded the assault with a rocket-propelled grenade an assassination attempt. Haniyeh and his family were in the house, but unhurt, in the second attack on his home in as many days. Also on Tuesday, Hamas accused Fatah gunmen kidnapping a member of the Hamas military wing and executed him in the street. The dead man was identified as a cousin of Abdel Aziz Rantisi, a Hamas leader assassinated by Israel in 2004.

Both Hamas and Fatah, on Web sites and in text messages to activists, called for the execution of the other side’s military and political leaders. Both sides described the fighting, which is turning more brutal with each day, as all-out civil war.

For earlier analysis on the situation in Gaza please check:

Also from David Eshel – 1967 Six Days War Retrospect:
How the Kremlin Manipulated the 1967 War to the Brink of Nuclear Conflict