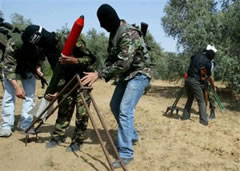 As rockets slammed into Jewish towns last Tuesday, Israelis apprehended that the five months “Hudna” (cease-fire) with the Islamic group was finally over.
In the first rocket attack it had claimed responsibility for in five months, Hamas fired 39 Qassam rockets and 79 mortars from the Gaza Strip aimed at nearby Jewish communities. The attacks occurred as Israelis nationwide celebrated the country’s 59th Independence Day.

IDF officials believe that Hamas was following Hezbollah’s copybook, in that the missile attacks were actually a diversion from an attempted kidnapping operation, which was detected and foiled by Israeli forces. In fact, the so-called Hudna never observed a cease fire at all and rockets kept falling nearly on a daily basis on Shderot and other Israeli settlements along the Gaza strip border. Since the disengagement there have been more than 2,000 rocket attacks, most of them Qassam rockets. There also have been almost 300 attacks using explosives. This was the Palestinian terror response to Israel’s unilateral 2005 disengagement, which handed the Gaza Strip over to the Palestinians and thus became their first sole responsibility.

Prime Minister Ehud Olmert, already under public pressure over the forthcoming Vinograd commission report due on Monday, decided that Israel will avoid a broad military response for the time being. But Major General Yoav Galant, commander of Territorial Command South, disagreed with the ruling consensus. The general had been warning that Gaza is becoming a “second Lebanon” and that if Israel fails to act decisively against the “rocket industry” and huge weapons influx, a future confrontation with Hamas would be much more costly. Israeli intelligence has been monitoring a Hamas build-up in the Gaza Strip, including the construction of an underground bunker defense along the border, with tunnels, weapon caches and fortified buildings. The IDF will thus be forced to adapt new tactics in planning its attacks- instead of the police-like low intensive combat (LIC) operations, the IDF now considers any offensive foray into Hamas territory to become high intensive combat(HIC) warfighting.

On the other side of the fence, Hamas is also changing tactics in preparation of the Israeli onslaught which is becoming inevitable and only a question of timing. After Tuesday’s attacks, Abu Abdullah, a leading official of the Hamas military wing, Izzedine al-Qassam Martyrs Brigades, warned a cease-fire his group agreed upon with Israel last November was now “officially over.” Last Tuesday’s rocket offensive was only a sample of what Hamas can now offer, with thousands of rockets in its arsenal Hamas could rage havoc among Israeli settlements up to Ashkelon, Abdullah claimed.

Indeed, an upgraded Hamas – under the leadership of military wing commander Ahmed Ja’abri – has succeeded in establishing a 10,000-strong army with a new arsenal of weapons, including hundreds of Qassam rockets, mortars, anti-tank weapons and tons of military grade explosives- all smuggled into the Gaza Strip through a vast tunneling network along the Egyptian border. Senior Israeli military sources describe the Rafah area along the border with Egypt, an area known by code name ‘Philadelphi’ as a subterranean maze spreading over 50 square km, consisting of a network of multipurpose, well-furnished tunnels, designed by Hezbollah engineers to combat tanks and armored infantry with the latest anti-tank missiles all supplied by Iran via Hezbollah.

Shin Bet director, Yuval Diskin warned recently that Hamas, were employing Hezbollah’s Lebanon tactics by building a Katyusha deployment, bunker network and anti-tank missile arsenal in the Gaza Strip. The northern West Bank, he said, had virtually been taken over by Hezbollah agents and radical Jihad Islami terrorists. Diskin’s portrayal of Sinai as a paradise for international weapons traffickers and a strategic threat to Israel was timed to caution the political leadership. The decision by Hezbollah to keep its head down in South Lebanon for the time being, Diskin warned, was employed to secretly opening two new anti-Israel fronts in the Gaza Strip and northern West Bank. This transposition of Hezbollah’s war against Israel to the Palestinian arena has begun to materialize, he told the Knesset.

Nor are manpower reserves lacking in Gaza. In theory there are over 300,000 males available within military age groups in the Gaza Strip alone. Nearly every family member has some kind of weapon in his possession. Apart from Gaza City ( over 400,000) Gaza’s other two main population centers are Khan Younis (population 200,000) in central Gaza and Rafah (population 150,000) in the south. The major cradle for unrest is in the densely packed refugee camps. The unfortunate fact is, that the majority of Gaza’s residents are refugees who fled or were expelled in 1948 from the land that became Israel. Most Gazans live in eight refugee camps, which have one of the highest population densities on earth. They are, Jabaliya (population estimate (106,691) Rafah (95,187), Shati (78,768), Nuseirat (57,120), Khan Younis (63,219), Bureij (28,770), Maghazi (22,266), Deir el-Balah (19,534), all boiling pots of misery and discontent, ready sources for Islamic terrorist recruiting. Intelligence estimates believe that in Gaza there are between 80,000 and 100,000 automatic rifles and machine guns. This represents the most armed people in the Middle East perhaps, except for Somalia. Only in 2006, thirty tons of military-grade TNT was brought into Hamas secret caches.

A senior official in the Hamas military, known by his nom de guerre, Abu Huzaifa, recently told the PA news agency Duniya Alwatan that since the Disengagement from Gaza, the Hamas has set up military bases in every city in Gaza. The bases have been training a new cadre of highly motivated fighters for the Jihad, or holy war against non-Moslems in general and the Jewish state in particular.

Any military incursion into the Gaza Strip presents an extremely complicated operation. Over 1,3 million people are living in unbearable squalor, packed into this narrow strip of land. Over sixty percent of the population is crowded into dense refugee camps with narrow alleys and irregular makeshift buildings, making any military operation a sheer nightmare. Thus, quite naturally, there is little enthusiasm among soldiers over the prospect of a new land incursion. It can be done, officers told visiting politicians, but what will we do on the day after? Even when the IDF operated freely in the northern Gaza Strip, during Operation Days of Penitence, in 2004, the Qassams continued to be fired, officers reminded them. Moreover, the very thought, that Israel will again control over a million Palestinians in the chaotic and lawless Gaza Strip sends cold shivers to most Israelis.

Whatever the case for an all-out invasion into the Gaza strip, it will be a different ballgame from any previous military operation held during the Second Intifada. The Hamas election victory last year inaugurated an accelerated push to build up strength in anticipation of a major clash. The Iranian aid, the porous Egyptian border and the internal ability to build infrastructure unhindered has led Hamas to go within one year “from zero to seven, on a scale of 10,” in the estimation of the Southern Command intelligence officers.

With Hamas in control, any future confrontation will become a costly adventure for both sides. Unfortunately, all this could have been prevented if wise statesmanship would have been present here only one year ago. It is well known that Abu Mazen virtually “begged” Israel not to authorize the 2006 January elections. While Israeli intelligence failed to assess the election results, basing their assumptions on the Palestinian polls, Abu Mazen was fully aware of Hamas’ overwhelming popularity. The Israeli government, influenced by Washington’s eagerness to foster the Bush “democratization doctrine” refused Abu Mazen’s plea not to allow elections in East Jerusalem, giving him pretext to postpone the elections. Israel’s political leadership feared that its international standing, enhanced by Sharon’s disengagement, would suffer a painful setback. It was a serious political mistake, for which Israel will have to pay dearly, with things to come.

What analysts now predict is an adverse international reaction to any major Israeli operation in Gaza, if the situation will continue to escalate into open confrontation, with mass casualties on both sides. World opinion will not tolerate an Israeli offensive into the crowded refugee camps, which Hamas has turned into a heavily bunkered defense. But Israeli officials warn, that should Palestinian missiles and mortars continue to rain on Israeli settlements and with suicide bombers running riot, there will not remain an alternative, but mount a major offensive into the Gaza strip. While the entire re-occupation of the Strip seems out of context, a limited Israeli controlled cordon sanitaire in the northern part, which was populated by former Israeli settlements, could be established again in order to place Palestinian rockets out of range from major strategic targets in the Ashkelon area. In fact, according to the 1994 Gaza-Jericho agreement a special paragraph depicted security arrangements of this kind within a security perimeter delimited by both sides. Meanwhile, the army is preparing, and on a scale that some liken to the preparations preceding the first Lebanon War in 1982. In Israel, such preparations tend to be self-fulfilling prophecies.

Analysts find it extremely difficult to decipher the logic that guided these latest actions by a Hamas led government last week. On the face, the responsibility lies with Prime Minister Ismail Haniyeh’s Hamas government, which is unable to exert any function over the rival factions and warlords. Some analysts in Gaza believe that Hamas’ decision to fire Qassam rockets at Israel on Independence Day was an attempt to make the Palestinian public forget the movement’s failure to restore order in the streets of the Strip.

Nor is the IDF sitting idely by watching the Gaza Strip turning into a huge military potential arsenal on its very threshold. For its part, Israel is clearly preparing for the possibility of war, redoubling infantry and armor maneuvers, as well as holding a nearly-unprecedented national civil defense exercise several weeks ago. IDF Chief of Staff Lt. Gen. Gabi Ashkenazy has made it plain that Israel should be prepared to root out terror in Gaza and that he, personally, is unsatisfied with the results of last summer’s combat in Lebanon, which will not be repeated here.