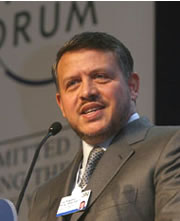 Two years ago, Jordan’s King Abdullah II accused Iran of planning a sinister scheme to employ tactics of intimidation, bribery and militia training of sectarian elements throughout the Middle East, in order to create instability among rival Moslem factions. The king warned that Iran’s quest toward empowering a “Shiite Crescent” stretching from Iran to Lebanon, would initiate the strategic dominance of Shiite power throughout the Middle East. At the time, King Abdullah’s allegations infuriated the Tehran Ayathollahs, who rejected his accusations as totally baseless. But these days, the escalating sectarian violence among Moslem brethren are clearly bearing out the Monarch’s predictions in a unprecedented internecine bloodbath reaching from Iraq to Gaza, via Beirut- all fueled by Iranian fingerprints. The hurried rise of hard-liner Mahmoud Ahmadinejad has certainly served to strengthen that resolve. In recent years, the “republic” has brazenly broadened its influence in Iraq, Lebanon, and in Gaza. Needless to say, the recent expansion of Shia forces in the region has caused the Saudi royal family much deserved anxiety. The hurried attempt by the Saudi king to host talks between the feuding Palestinian groups of Fatah and Hamas to end fighting that has killed at least 30 people over the past three days in the Gaza Strip clearly indicates this growing concern.

The sectarian bloodshed in Iraq, between Arab Shiites and Sunnis, all have the signs of a hegemonic Persian ambition. No one in Iraq exemplifies this better than Moqtada Al Sadr, the leader of its largest Shia militia — the “Mahdi Army” to which the Iranian government is behind shipping components used to make improvised explosive devices for Iraqi insurgents, fighting both US forces and Sunni militias.

Some of the most violent attacks struck Shiite targets in the Baghdad area this week, as the Islamic sect marks Ashoura, the holiest day in the Shiite calendar commemorating the 7th century death of Imam Hussein. Although Shi’ites are the minority sect of Islam, they form some 60 percent of Iraq’s 26 million people and have dominated the government following the U.S.-led invasion of 2003. Since the invasion, millions of Shi’ites make the pilgrimage to Hussein’s shrine in Kerbala, transforming the Ashura festival into the biggest national day and confirming the ascendancy of Shi’ism. The Najaf province strike came only a day after mortar shells hit the courtyard of a girls’ school in a mostly Sunni Arab neighborhood of Baghdad. An Iraqi police official said that among the alleged 300 militants which had been killed during the fierce weekend battles, included 30 Afghans and Saudi volunteers, possibly recruited by Al Qaeda.

Meanwhile President Bush has stepped up his response in a last minute effort to curb the escalating violence in Iraq. As hundreds of thousands of Americans march in protest against George W. Bush’s war policies, the president has authorized U.S. forces in Iraq to take whatever actions are necessary against Iranian agents considered a threat to American troops or the public at large.

The White House made the announcement last Friday in Washington, claiming that the aggressive new policy is a direct response to intelligence reports, that Iran is supporting terrorists inside Iraq and is providing sophisticated improvised explosive devices (IED) – and other equipment to anti-American. insurgents. On January 10, President Bush accused Iran and Syria of allowing terrorists and insurgents to use their territory to move in and out of Iraq. He warned that US troops would take measures, including seeking out and destroying ” the networks providing advanced weaponry and training to our enemies in Iraq.” According to new orders, US troops in Iraq now have full authority to kill or capture Iranian agents deemed to be a threat. AS result, five Iranians were detained by U.S.-led forces earlier this month after a commando raid on an Iranian government liaison office in northern Iraq. According to Associated Press news agency, the administration said at the time that U.S. forces entered an Iranian building in Kurdish-controlled Irbil because information linked it to Revolutionary Guards and other Iranian elements engaging in violent activities in Iraq.

In Lebanon, the Iranian sponsored Hezbollah-led bloc’s effort is poised to carry out the first Middle East revolution this century to overthrow a pro-Western government. Although it seemed to peter out over the weekend, intelligence sources estimate that the grand strategic design is to to go forward in calculated stages, rather than a continuous operation. Only last Tuesday, three Lebanese were killed, 133 were injured and the entire country was virtually paralyzed by Shiite cordons on strategic locations, a clear signal of what is in store. The anti-government bloc, headed by Hassan Nasrallah and pro-Syrian allies, Gen. Michel Aoun and the north Lebanese Faranjieh clan, has been encouraged by its initial effectiveness to carry on to the next stage at some unspecified moment. Here too, there is a clear Tehran design to dictate the modus operandi.

As if the internecine Hamas Fatah fighting in the Gaza Strip seemed to have stopped suicide attacks on Israel for a while, the bloody attack by an Islamic Jihad bomber, identified as Mohamed Faisal al-Sahsah, 21 from Gaza, indicated that Iran would not let this temporary lull to continue. Military sources disclosed, that the fingerprints of the newly appointed Jihad Islami leader of Palestinian Jihad Islami terrorist ace Muhamed al Hindi were clearly distinct on Monday’s Eilat suicide bombing. Al Hindi returned to the Gaza Strip on January 19 after a six-month absence in Damascus, Beirut and Tehran, during which his Syrian and Iranian masters appointed him chief of the operations. His former boss, Abdallah Ramadan Shelah, who seemed to have lost some favor to his Tehran masters, was a key member of the Palestine delegation, which held recent talks in Damascus last week, presided by Ali Larijani, the secretary general of Iran’s Supreme National Security Council (SNSC).

Commenting on the seriousness of the escalating inter-Arab situation, a senior official in the court of Jordan’s King Abdullah believes that “a domino effect is beginning to emerge among those who can exercise a veto and are not necessarily interested in resolving the Israeli-Palestinian conflict, but rather in maintaining the political boost that it gives them. Islamic Jihad has a veto over Hamas decisions; Hamas can impose a veto on PA decisions; Damascus also holds a veto, albeit a partial one, over Hamas’ conduct; and meanwhile Iran seeks to hold a vital position in the balance of powers created by the war in Iraq. This is a strategic chess game, led by Tehran, in which Abbas, Shallah and Meshal are only pawns. Israeli intelligence officials warn that the Palestinians themselves are no longer certain that they have the ability to make decisions independently.