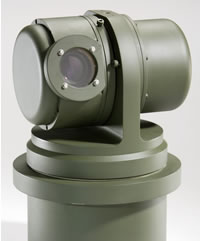 A version of the US Army TUSK upgrade kit for the M-1A2 was on display at AUSA 2007. This version is fitted with two Remote Weapon Stations and a second coax machine gun, mounted over the main 120mm gun. To further improve the tank’s performance in asymmetric warfare GD ATP introduced two types of ammunition for the main gun – the M-1028 Canister round and a high explosive round, coproduced with Nammo.

A stabilized miniature imaging platform was demonstrated by Carl Zeiss Optronics from Germany. The system uses a dual sensor (CCD and an uncooled thermal infrared imager) mounted on a stabilized, swiveling platform optimized for near-field observation. The system has been selected for installation on Leopard 2, modified for Peace Support Operations (PSO), where two systems will be installed on the left and right sides of the turret, providing 360 deg. panoramic coverage for the crew. The system will be provided with an automatic motion detection system providing threat warning. An optional laser rangefinder complements the system, by installation on armored fighting vehicles, offering 360 deg. view. The system’s weight is less than five kilograms therefore facilitating installation anywhere on the vehicle, including on elevated masts. The stabilization enables the crew to view images on the monitor even when the platform is traveling at high speed.

BAE Systems demonstrated its Watch-6 vehicle perimeter peripheral surveillance system, effectively covering the vehicle’s surroundingfrom positions at the four corners of the vehicle. The sensor includes uncooled thermal and video cameras, for day and night surveillanceunder all visibility conditions. Check-6, a camera integrated into teh vehicle’s headlights and tail lights.

A different concept of a panoramic vision system was demonstrated by Elbit Systems, introducing the ‘See Through Armor’ (STA), a panoramic observation system which can be embedded into new armor, or installed as ‘add-on’ to existing vehicles, providing the vehicle crews with an omni-directional combat scene seen from within the armored vehicle, when the crew is ‘buttoned in’ with hatches closed. An equally realistic view can be obtained from an unmanned platform. The objective of the system is to improve the crew’s situational awareness under all conditions, including extended ‘silent watch’ missions in areas where close-quarter defense is imperative (including urban areas, jungle etc), where the techniques, tactics and procedures (TTP) dictate maximum force protection with the crew remaining ‘buttoned up’ inside their vehicles for hours. Under such conditions, limited visibility creates ‘dead zones’ attracting attack by hostiles, exploiting the limited visibility by the crew, to hit the vehicle with RPGs or lay down belly-striking explosive charges activated from a distance.

A complimentary sensor that can be applied to panoramic vision is the ‘Spotlite M’ electro-optical fire locator from RAFAEL Defense Systems. The system, unveiled at AUSA 07 provides fully panoramic coverage of the vehicle’s surrounding, with superimposed cueing indicating potential threats based on detection and localization of fire sources, within few seconds from a gunshot or rocket-launch occurrence. RAFAEL plans to complete an integrated vehicular system before year’s end.

Panoramic vision systems complement remotely operated weapon stations currently installed on many armored combat vehicles. AUSA 2007 was dominated by the Kongsberg Defense’s Protector Remote Weapon Station (RWS), recently selected by the US Army for teh CROWS program. The system provides troops with the ability to acquire and engage targets while travelling inside a vehicle, protected by its armor. It is designed to mount on a variety of vehicle platforms, support weapons such as the Mk19 grenade machine gun with 96 grenades ammunition capacity. The system can also mount a .50 Caliber M2 machine gun with 500 rounds, M240B machine gun with 1,000 rounds and M249 Squad Automatic Weapon (SAW) with 2,000 round capacity. Protector RWS were also demonstrated at AUSA 07 on the M1A2 tank (operated by the commander and loader).

(unloaded, unarmored) and protrudes 28″ above deck. The system can be folded to reduce height by 10″ on transit.

The Army may have a requirement for an even lighter remotely controlled weapon mount, designed for vehicles with minimal payload availability such as the HMMWV, as well as heavy trucks. This mount is designed for medium and light weapons such as M240B and M249.

One candidate for this platform is the ROI Lightning, weighing less than 200 lbs (above the roof), including weapon

and ammunition. Lightning is fitted with day and night optics. Also evaluated are the integration of CROWS-Lightning and the PD Cue 4 corner acoustic gunshot detection system, offering complete threat detection and engagement capability. Two additional lightweight weapon stations at AUSA were Rafael’s Samson Junior and Elbit Systems ILAW. The Samson is a lightweight member of the Samson family of RWS, designed specifically for light weapons such as the M240/M249 class weapons.