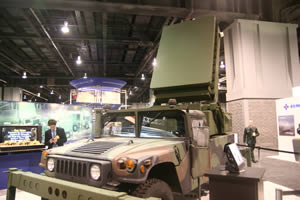 The centerpiece of the fire support systems presented at AUSA 2007, the latest upgrade of the US Army M-109A6 Paladin. Lockheed Martin unveiled the first prototype of the Army’s future hostile fire location radar, EQ-36. Other systems included a range of air defense weapons, including a first appearance in the USA of the next generation Stunner air defense missile, displayed by Raytheon.

New developments in fire support at AUSA were highlighted through introduction of the upgraded M-109A6 Paladin system. BAE Systems unveiled the latest upgrade for the M-109 self propelled gun, under development for the U.S. Army under a Public-Private Partnership (P3) signed between BAE Systems and the Army’s Tank Automotive & Armaments Command (TACOM), Program Executive Office for Ground Combat Systems, Project Manager – Heavy Brigade Combat Team (HBCT) and the Anniston Army Depot. The new upgrade called Paladin Integrated Management (PIM) program is expected to be carried out during upcoming reset of M109A6 Paladin SP howitzers and M992A2 Field Artillery Ammunition Supply Vehicles (FAASV). These activities will be undertaken by the Anniston depot. The M109A6-PIM is considered to be the most cost-effective method to significantly improve sustainability and survivability, while reducing the logistics burden on the HBCT and supporting fires brigade.

The M109A6-PIM uses the existing main armament and recently designed cab structure, while replacing outmoded chassis components with advanced elements from the Bradley Combat Systems, to increase sustainability and commonality across the HBCT. The upgrade will also introduce select technologies from the Future Combat Systems Non-Line-of-Sight Cannon (NLOS/C), including an automated projectile loader and modern electric gun drive systems, replacing the current hydraulically operated elevation and azimuth drives, designed in the early 1960s. The electric gun and ammunition handling components, as well as a micro-climate (air conditioning) system, will be powered by BAE Systems’ Common Modular Power System (CMPS), recently elected for installation on Stryker and HMMWV. The system featured on the M109A6-PIM is capable of providing 35 kilowatts of 600-volt direct current which can be used for voltage conversion and can support other higher power loads required within the Paladin platform.

Modern armies, particularly the US and British armies are reevaluating the role of the light mortar, recognizing its contribution to provide close, accurate and self-sustained support at company and battalion level. These small caliber weapons, including 60, 81 and 120mm tubes offer mechanized and dismounted units effective, accurate firepower capable of hitting targets at ‘non-line of sight’ engagement, particularly in urban, mountainous and densely vegetated areas, including jungle or forest. Self propelled mortars operated by the US Army in the Stryker brigades are operated as a self-propelled fire bases, fielding 120, 81 and 60 mm tubes. The British Army is also considering using this concept with its FRES IFS mortar carrier variant, which will include a 60mm and 81mm tubes, with a growth option to 120mm.

The 60 mm mortars are becoming a popular weapon of choice among peacekeeping forces, engaged in war against terror in Afghanistan and Iraq, where they are rapidly fielded as low-cost, highly effective defensive or offensive weapon to improve the integral fire support of small contingent forces fielded by contributing NATO members. Old generation tubes, including 60mm and 51mm tubes were quite popular in the past, but in recent years were practically shelved due ammunition obsolescence. The British Army already decided to phase out its 51 mm tubes in favor of 60 mm mortars, while the US Army is currently considering a similar move. The Israeli army fields 60 mm tubes with all tanks and heavy APCs as a lesson from the 1973 Yom Kippur war.

As one of the innovators in this field, Israel’s mortar expert Soltam Systems introduced a new, lightweight C-06 60mm mortar system offering 20% weight reduction by utilizing forged aluminum base plate, lightweight bipod and highly efficient tube, capable of firing mortar bombs with M-38A1 proximity fuzes, dramatically increasing the lethality of the weapon against unprotected targets, while minimizing collateral damage by using smaller caliber bombs. In fact, a two man firing team can rapidly generate continuous fire for effect within very short time, in direct support of their units. Mortars are usually operated manually at targets visible by a fire director or the firing team. Firing at high precision at a specific GPS location can achieved within less than 30 seconds with this weapon, using Soltam’s hand-held fire control computer, which supports the entire range of tubes, including 120, 81 and 60mm.

DARPA and BAE Systems have more ambitious plans for the 60 mm mortar. At AUSA 2007 BAE Systems displayed the latest model of the Optically Directed Advanced Munition (ODAM), developed under a $9 million program awarded in 2005 by darpa. Under this initiative, BAE Systems is planning to demonstrate a laser-guided, low cost optical seeker for the 60mm mortar. The guidance kit will be designed to replace the current 60mm mortar fuse to improve firing precision. Additionally, research will be done with explosives to improve the effectiveness of 60mm explosive rounds. Accroding to DARPA, the goal is to develop a 60mm projectile with the effectiveness of a 105mm high explosive projectile. If fielded, such systems could improve the effectiveness of small dismounted units, employing precision indirect munitions that can operate across multiple environments, including urban and mountaneous terrain.

One of the major displays by Lockheed Martin was an operational prototype of the U.S. Army’s new Enhanced AN/TPQ-36 radar, known as the EQ-36 Counterfire Target Acquisition Radar. In January 2007 Lockheed Martin was selected as prime contractor of on this program. EQ-36 will be able to detect, classify, track and determine the location of enemy indirect fire such as mortars, artillery and rockets in either 90 degree or 360 degree modes. The 360 degree mode is of special advantage for force protection in a modern, asymmetric warfare. Such performance poses more challenging task for current artillery location radars, covering a limited 90 degrees sector.