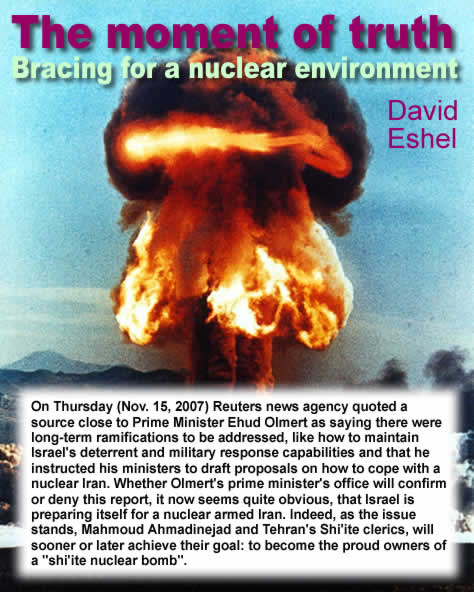 There is no argument whatsoever, that any government’s job is to prepare for all contingencies and in Israel, being under constant threat from a still hostile Muslim world, this issue must be fully addressed by its defense community. Iran has officially declared its intention to destroy the Jewish state and, if Israel wishes to survive, it must prepare itself for even the worst case scenario of a nuclear Iran- which, once having the capability will also try to use it.

The question is not whether Israel has the will to stop Iran’s nuclear ambitions – no doubt it would like to, but has it really the means to implement this intention? On the other hand, the US certainly has the means, but will Washington give the order and prevent Iran from becoming an unpredictable nuclear power? At this time, barring a lot of tough talk, no such action seems imminent and nearing the end of George W Bush’s second term in the White House, determined action seems highly questionable. So Iran will probably become the first “rogue” nation to have a nuclear bomb in its arsenal. By all means this itself represents an abhorrent prediction – but unfortunately has to be taken at its realistic face value.

Last Thursday, the UN nuclear watchdog Mohammed El-Baradei’ presented his report on Iran. Singing its praise, the Vienna placed UN office found Iran to be “generally truthful” about key aspects of its nuclear history, but warned that its knowledge of Tehran’s present atomic work was shrinking. Unfortunately, like such former reports, this one contained more questions than answers: “The International Atomic Energy Agency (IAEA) remained unable to ascertain that Iran did not have a secret, parallel military enrichment program because Tehran was still denying inspector visits to anything but its few declared nuclear facilities” it concluded.

There is no doubt that one man in Tehran was very happy with El-Baradei’s report! “We welcome this, that the International Atomic Energy Agency has found its role and with the publication of Mohammed El-Baradei’s report the world will see that the Iranian nation has been right and the resistance of our nation has been correct,” President Mahmoud Ahmadinejad said glibly.

Whether Israel, or in fact, any other well armed and prepared nation facing a nuclear threat should however tremble with fear from such a horrible doomsday weapon remains debatable, if the facts be carefully examined and assessed.

There is little argument, that a nuclear warhead can destroy an entire city, or even much more. A small, but increasing, number of nations already possess nuclear missiles. However, no nation has ever launched a nuclear missile against an enemy. Moreover, nuclear war isn’t something one decides en-passant some morning and initiating it on the following afternoon. Such highly complex and dangerous action requires intensive pre-planning and preparation over a period of months and even years. Therefore, special tasks must be carried out to assure post-war recovery, which will not remain one-sided, to assure, what Russian strategists named “nuclear rocket supremacy.” For example, an attacker must quietly move key factories to secret underground locations. An attacker must also stockpile strategic supplies, raw materials, food, fuel, and machine tools for rebuilding vital industries. In fact, the most dramatic advanced measures would no doubt be leaked in vigilant press reports. During the Cold War Russian generals believed that only an extensive disinformation campaign could mask such preparations.

Sofar Israel has staunchly maintained its so-called nuclear ambiguity policy, which has served the nation’s strategic options extremely well. However, should Iran, or for that matter other Arab countries, opt for a nuclear weapon, it seems only logical that the Jewish state would have to adapt a different nuclear strategy in order to maintain its viable deterrent fully convincing. There are some signs that this process is already under new scrutiny. Despite all recent denials by the PM advisory entourage, following last Thursday’s Reuter report, one of the topics of Olmert’s ordered “secret memorandum was being prepared for “the day after” Iran owned atomic warheads”, could perhaps re-assess Israel’s ambiguity policy, coming to terms with the new evolving regional circumstances.

All realistic assessments indicate clearly, that Israel cannot afford to create, neither passive nor a hermetical active defense layer to totally prevent a nuclear warhead-tipped ballistic missile to strike its major cities. In order to create a viable and convincing deterrent ensuring its very survival, Israel has to establish the following strategies:

While passive or active defenses can prevent an accidental or limited attack, and reduce a massive attack, defensive measures have limitations when facing a determined nuclear strike:

Retired Major General Yitzhak Ben-Yisrael, former head of the Israel Ministry of Defense ‘Defense Research and Development Directorate’ specified that although Israel’s nuclear deterrent policy remained important in the country’s defense doctrine, developing a pre-emptive strike capability is also necessary. “As a small country,” Ben-Yisrael said, “we cannot go into battle for lengthy periods of time and the option of a preemptive strike is in line with this.”

According to the prestigious London newsletter Foreign Report, published in 2007, the Israeli Defense Ministry is reportedly pressuring government officials to authorize a policy that would allow Israel to retaliate with nuclear weapons, in the event that it suffers a nuclear first-strike attack. The newsletter also reported that the Israeli government is “coming to terms” with the possibility that Israel’s nuclear deterrent will be inadequate, because an Iranian nuclear first strike could disable or destroy Israel’s capability to retaliate.

Much has been written lately in the open Israeli media over Israel’s potential “second strike” option by a submerged submarine fleet, led by the German delivered Dolphin subs. A second strike option may be a viable option, as long as the active defense barrier is considered fully reliable, establishing a ‘full proof’ barrier against a nuclear attack, or keeping their damage within “acceptable” proportion. However, given the geographic and demographic situation of the country, Israel cannot tolerate any nuclear incident anywhere in or near its territory. In other words, Israel cannot absorb or tolerate any ‘lesser’ nuclear strike, weather it is aimed at its heavily populated center or attack strategic or military targets.

Israel’s vulnerability is inherent of its small size and densely populated area. Almost half of the nation’s population (2-3 million) reside or work in and around the Tel Aviv metropolis area, which is also the nation’s business and finance center. 50 km to the east Jerusalem, the nation’s capital and religious center for Jews, Moslems and Christians also has a population of around one million while Haifa, the third largest city located less than 100 km to the north. A nuclear strike on or near any of the cities has the potential to kill hundreds of thousands people in the first instant, tens of thousands more would perish from fires and radiation.

Absence of a ‘retaliatory option’ leaves no other option but ‘pre-emptive strike’, where a nation would launch a preliminary strike against an enemy, once there are clear indications of an imminent attack. A hypothetical, measured pre-emptive strike could use unconventional effects employed as ‘last resort warning’ before attacking sensitive targets. Modern intelligence gathering resources are already available to provide such ‘clear and indisputable indications’ in time for the leaders to take decisive action. When and if such determined action is executed, it should have dramatic, ‘game changing’ effects that could prevent a nuclear collision between democtratic-led moderates and a fanatic rogue statehood.

Before Israel could take such course, it should be prepared to lift the veil off its true capabilities by aborting its decade-long nuclear ambiguity policy. This policy has served Israel well under a nuclear-free Middle East, but will no longer maintain its true value, when, for example Iran declares its new nuclear weapons capability. It will then become imperative for Israel, to bring its full-scale operational capabilities fully to light, in order to convince any “newcomer” to the nuclear club, that further hostile declarations, moreover actual threat will be dealt with, by decisive and devastating response, making any threats a high-risk adventure, with insurmountable consequences for any potential attacker.

“Samson Option” is it still valid?

All Israeli leaders, from every political party have repeatedly sworn that “Never again would the Jewish people be subjected to another Holocaust threat”. Within this solemn pledge, first strikes have characterized the Israeli’s foreign policy. The highly effective Israeli first-strike air assault on June 5, 1967, destroyed the entire Egyptian air force on the ground at the start of the Six-Day War. But more parallel to the urgency surrounding the situation of Iran’s having nuclear weapons is the June 1981 air attack that took out Iraq’s Osirak nuclear reactor.

A pre-emptive strike option was mentioned repeatedly when analyzing Israel’s options for a retaliatory strike on hostile nuclear potential, before it is too late. The use of nuclear attack was referred to as a “Samson Option“, described by several fiction and non-fiction authors, as it remind of the famous biblical story of Samson’s war with the Philistines (Judges 16:4-30).

Israel’s geography needs no reminder what kind of existential threat a nuclear attack could pose on its population centers. A nuclear threat from the Tehran “mullahs with nukes” cannot be tolerated. Any such threat, once imminent, must be forestalled by all means.