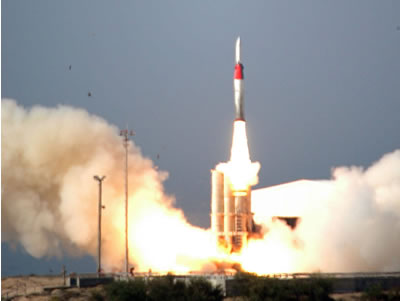 Israel’s multi-layered anti-ballistic defense program known as “Choma” (Barrier wall in Hebrew), headed by Arieh Herzog, was developed to mitigate ballistic missile threats. “What made our “Arrow” system unique right from the start is its role, to protect Israel’s civilian population from missile attacks. Other Anti-Ballistic Missile (ABM) systems were developed to protect limited targets such as deployed forces. Arrow and “Choma” are designed to protect the entire country” says Herzog.

Since 1989, some US$ 2.4 billion have been invested in the Arrow program, 50% of which donated by the US Government. The current production of missiles, in the US is also funded by both countries.

“In the past we focused on the Scud missile and its derivatives” Herzog told Defense Update, “Today we face more diversified threats – a numerical threat by Syrian medium range (Scud based) missiles, the threat of short range rockets, primarily from Lebanon and long range missiles, with future nuclear potential, from Iran.”

The current Mid-East Scud derivative arsenal comprises Scud B, C and D variants, which became more accurate and sophisticated, based on North Korean missile technology, capable of attacking targets at a range of up to 700 km. These New Medium Range Ballistic Missiles (MBRM) are employing solid state digital systems, for flight control, navigation, pre-launch sequencing etc. This capability enables faster response due to automated pre-launch preparations and also improving accuracy. Such missiles are more difficult to intercept and destroy, as they employ a wide range of countermeasures, among them decoys, trajectory shaping, to distract interceptors. According to Herzog, the Arrow system was designed with significant growth capability and flexibility. The baseline capabilities of the Arrow system were designed to defend against Scud type threats, including such missiles equipped with non conventional (chemical and biological) warheads.

The Iranian government is investing major effort to develop indigenous missile technologies and expanding the missile production industrial base. The mainstay of Iran’s offensive potential threatening Israel, is based on the indigenously developed Shihab family of missiles, which was first flight tested in 1998. With a range of 1,300 km, Shihab 3 missiles are already capable of attacking all over Israel, including its strategic facilities. “This platform and other delivery platforms are maturing in parallel with the Iranian nuclear weapons program, with the potential to put a nuclear missile in Iranian hands in the foreseen future”, says Herzog. “This imminent threat is the new challenge for the Israel’s missile defense system”.