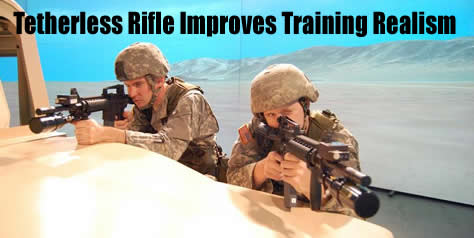 The Cubic Corporation (AMEX: CUB) is introducing a tetherless version of the M-4 training rifle, fitted with a gas-operated recoil and wireless link, allowing for greater freedom of movement and more realism during tactical simulations. The new simulator battery operated weapons are linked to the EST via 2.4GHz wireless connection. The recoil is gas activated by an integral compressed CO2 cartridge housed in either the ammunition magazine or in attachments to the simulated weapon.

The tetherless training weapons can be used either with Cubic’s EST 2000 Engagement Skills Trainer or its Warrior Skills Trainer, an enhancement to EST 2000 that enables soldiers to move around either on foot or in a moving vehicle in a simulation environment that replicates the weather conditions, convoy attacks and judgment issues that arise in certain combat situations. These trainers are used by thousands of military personnel throughout the world to develop marksmanship, judgmental and collective training skills.

“There has been a growing demand for the soldier to train as they fight, and a tethered weapon can prevent movement, restricting motion in a collective mode,” said Terry Fiest, director of Business Development for U.S. Army Programs for Cubic’s Orlando division. “A tetherless weapon is more suited to tactical engagements and gives the soldier more latitude. We are finding that our customers like tethered weapons for marksmanship and they prefer tetherless for dismounted and offensive training scenarios.”

The first tetherless system was delivered in 2007 to the Mississippi Air National Guard at the Combat Readiness Training Center in Gulfport. Additional systems are on contract for the Wisconsin Air National Guard’s Combat Readiness Training Center at Volk Field later this year. More than 1,000 EST 2000 systems are operational at Army and Air Force installations worldwide, including the continental United States, Alaska, Hawaii, Korea, Germany, Afghanistan, Kuwait and Iraq. Cubic’s Orlando division is now working on converting other weapons used in EST 2000 and the Warrior Skills Training to operate in a tetherless environment. Cubic could potentially create tetherless technology for law enforcement users in the future. The company’s Orlando site is used as a training venue for Central Florida law enforcement teams who want to train with Cubic’s laser-based ground combat training instrumentation.