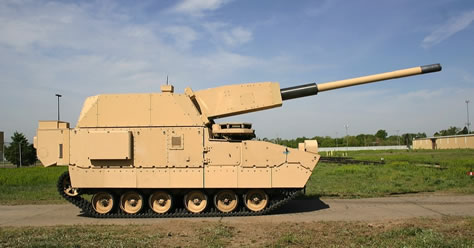 The primary purpose of NLOS-C is to provide responsive fires in support of the Future Combat Systems (FCS) Combined Arms Battalions (CABs) and their subordinate units in concert with other fire effects, including line-of-sight, Beyond-Line-of-Sight (BLOS), Non-Line-of-Sight (NLOS), external and joint capabilities. The system provides flexible support through its ability to change effects round-by-round and mission-by-mission. These capabilities, combined with rapid response to calls for fire and rate of fire, provide a variety of effects on demand.

The cannon will be able to move rapidly, stop quickly and almost instantly deliver lethal first round effects on target. The cannon will have a Multiple Round Simultaneous Impact (MRSI) capability, to maximize the effect on a target, from a single gun or a small number of firing units. The NLOS-C system mounts an ultra-lightweight 38-caliber, fully automated 155-mm howitzer. A fully automated ammunition handling system is installed, holding 155-mm projectiles and Modular Artillery Charge System (MACS) propelling charges in ready to load racks. The automation eliminates the physical handling of ammunition and provides the system to fire rounds at sustained rates with minimal physical effort. The system will enable rapid rearming and refueling.

As a fully automated system, NLOS-Cannon integrates all crew operations – firing, moving, training and maintenance – into a digitized two-man cockpit, providing automated handling of all gun systems, real-time situational awareness, and effective protection from battlefield conventional and unconventional threats, including nuclear, biological and chemical environments. The NLOS Cannon, as with all FCS Manned Ground Vehicles (MGV), incorporates active and passive protection systems to enhance crew and platform survivability against all types of battlefield threats.

In September 2006, BAE Systems completed the integration of the NLOS-C first Firing Platform, to be used for firing tests through 2008, when the NLOS-Cannon prototype was delivered on May 30, 2008.

This prototype was the first of nine vehicles to be delivered to the Army for engineering, mobility, safety and reliability testing as well as gun firing, to be conducted at the Army Yuma Proving Grounds, Arizona, by 2009. The five early configuration platforms including the first prototype currently delivered will be supplied this year and the remaining three will be configured in a full system development and demonstration (SDD) design, will be delivered by early 2009.

The firing platform uses a 38-caliber length, fully automated 155-mm howitzer, developed at BAE Systems’ Minneapolis System Integration Facility. The Firing Platform’s howitzer is integrated with a fully automated ammunition handling system. The platform, made of a combination of high-strength steel and aluminum, incorporates a cannon assembly that is 1,200 pounds lighter than the M777 cannon previously tested on the NLOS Cannon Concept Technology Demonstrator.

The prototype of the NLOS Cannon is the first vehicle destined for the FCS program to utilize the new hybrid-electrical proplusion. All eight of the FCS manned combat vehicles are mounted on nearly the same chassis — they share more than 80 percent compatibility across the family of vehicles. They are unique in that they are electrically powered. A diesel engine on board turns a generator, which in turn charges batteries, which in turn powers electric motors that drive the tracks. In fact, the entire vehicle is electrically powered.

Much of the advanced technology being developed for the NLOS Cannon is being incorporated into the design and development of other vehicles in the MGV family, such as the NLOS Mortar. The NLOS Mortar is being designed by BAE Systems to have an estimated 80 percent commonality with the NLOS Cannon chassis and mission equipment to reduce maintenance and logistics. A NLOS Mortar Firing Platform is expected to be delivered for testing and qualification in spring 2007.