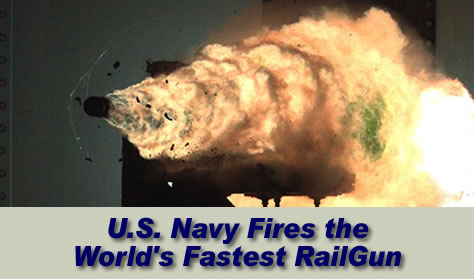 The U.S. Navy’s Office of Naval Research successfully conducted a record-setting firing of an electromagnetic rail-gun at Naval Surface Warfare Center, Dahlgren, VA. The new technology demonstrated in the recent test uses high power electromagnetic energy instead of chemical energetic (explosive) propellants to accelerate a projectile farther and faster than any preceding gun. At full capability, a future rail gun will be able to fire a projectile more than 200 nautical miles (ten times farther than current Mk 45 five inch guns) at a muzzle velocity of mach seven and impacting its target at mach five. These high velocity projectiles will be able to destroy targets by kinetic energy, rather than with conventional explosives. According to Dr. Elizabeth D’Andrea, ONR’s Electromagnetic Rail-gun Program Manager, the elimination of explosives from both propellant and warheads will have significant contribution to the safety on board future combatants.

Science and technology challenges met by ONR in the development of the rail gun include development of the launcher, pulse power generation and the guided projectile design. The program’s goal is to demonstrate a full capability, integrated railgun prototype by 2016-2018.

The program is conducted as a U.S. Navy Science and Technology investment, in partnership with industry (Boeing, Charles Stark Draper Lab, Inc., and General Atomics and the Lawrence Livermore National Laboratory, the U.S. Army and the UK MOD. Among the industry participants are Several Navy establishments are contributing to the program, including the U.S. Naval Academy, Naval Postgraduate School, Sea Systems Command (PMS 500), Naval Surface Warfare Center and Dahlgren Divisions.