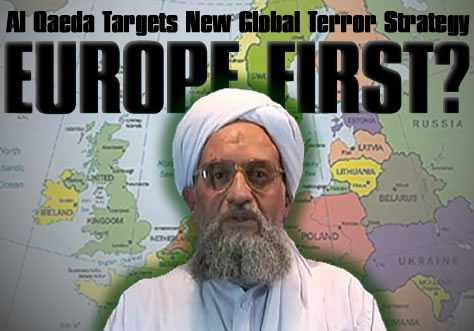 At the European Security conference in Munich, last February, US Defense Secretary Robert Gates told European nations that they were under direct threat from Islamist extremists and that this phenomenon would not go away. His warning followed Western intelligence services which already established operational links between al-Qaeda in Afghanistan and the Islamic Maghreb (AQIM) whose goals include striking at the heart of Europe. (see our analysis: Defeated in Iraq Al Qaeda Migrates to Maghreb – Next Stop: Europe). “I am concerned that many people on this continent may not comprehend the magnitude of the direct threat to European security” the secretary lamented. Gates warned: “The threat posed by violent Islamic extremism is real – and it is not going away. Europeans knew “all too well” about the Madrid bombings that killed 191 people in March 2004 and the attacks in London that left 56 dead in July 2005, but further from the spotlight there had been “multiple smaller attacks” in cities from Glasgow to Istanbul”, Secretary Gates said.

Al-Qaeda has not made any secrets of its eagerness to target Europe. Indeed, Osama bin Laden’s number two, Ayman al-Zawahiri, has repeatedly threatened Europe. In September 2006 he appeared in a video website on the fifth anniversary of the 11 September attacks, urging to punish France as prime target for Islamist militants. Pierre de Bousquet de Florian, then head of the DST (domestic security service), said the threat of terrorist attack in France remained “very high and very international”.

In fact, the Islamic terrorist group continues to be the most serious terrorism threat to Europe, said Gilles de Kerchove, newly appointed coordinator of counter-terrorism efforts among EU member states, speaking to the European Parliament, last November. He mentioned European converts to radical Islam having had a hand in several recent terrorism plots on European soil, including a foiled attack in Germany in 2007. German counter terrorist authorities claimed of up to 50 Islamic militants linked to the three men were suspected planning to assassinate the head of Germany’s federal police, Joerg Ziercke. Two German citizens and one Turkish national were arrested in connection with the plot. They allegedly trained in terrorism camps in Pakistan before founding the domestic cell of an al Qaeda affiliate inside Germany.

Also, last September, based on information provided by US intelligence, German counter terror agents arrested three members of an al-Qaeda cell that planned to bomb Frankfurt airport and the nearby US military air base at Ramstein. This network allegedly had ties to other European countries, since the explosives seized were similar to those used in the London plots. The investigation also showed that the alleged terrorists had connections to both Pakistan and Syria. Another important fact revealed that two of the three were Muslim converts. However, thanks to the outstanding job of counter-terrorism services, fortunately, al-Qaeda’s only major success in Europe in 2007 was the June 30 attack on Glasgow airport that killed one and injured five. That attack had followed two foiled car bombs in the center of London that could have killed hundreds, had it been successful. The scheme was nicknamed the “doctors’ plot,” because it was planned by foreign doctors who resided in Britain.

In Spain, which is also a major target for Islamic terrorism, security services dismantled an al-Qaeda affiliated terror cell almost exclusively manned by Pakistani, except for a single Indian member. It was planning a terror attack in Barcelona. The local newspaper El Pais reported, that interrogations revealed a wave of planned attacks in Germany, France, Britain and Portugal.

Britain’s intelligence Chief Jonathan Evans has also spoken out against domestic radicalism, saying that the number of individuals in Britain with suspected terrorist links has risen to at least 2,000 in 2007, compared with less than 1,600 in 2006. “As I speak, terrorists are methodically and intentionally targeting young people and children in this country,” he said in a speech to the Society of Editors Conference in Manchester. “They are radicalizing, indoctrinating and grooming young, vulnerable people to carry out acts of terrorism.”

Tom Fingar – a former State Department intelligence officer and currently, chairman of the National Intelligence Council (NIC), an office, under the director of national intelligence, that leads the joint National Intelligence Estimate (NIE) drafting process – expressed concern about the possibility of Europe-based terrorists attacking the United States, citing the ease of travel from European countries. His concern is very real: For example, a convicted terrorist known as Dhiren Barot, a Hindu Indian by birth, converted to Islam, worked as an airline ticket and reservations agent in Central London, when he was arrested by British agents in 1994. Now serving a thirty-year sentence in a British prison, Barot had “reconnaissance plans” of buildings in New York and Washington, including Citigroup, the New York Stock Exchange, and International Monetary Fund headquarters.

Another terrorist, Younis Tsouli, a Moroccan born UK resident, who recently pleaded guilty to terrorism charges in Britain, was an administrator of an online jihadist forum. On his laptop, authorities discovered a folder labeled “Washington” containing video clips of the U.S. Capitol grounds and the World Bank’s D.C. headquarters. US counter terrorist agents claim that terrorists from European countries face far fewer obstacles to infiltrating the United States. A majority of them can make the trip legally under the visa waiver program. In addition, many of them speak English and have experience living in Western countries, making it far easier for them to adapt to life in America.

An extremely interesting study on the cultural threat, posed by Islamic terror on Europe was published in “The Washington Quarterly” Summer 2004 edition, by Timothy M. Savage, a former U.S. foreign service officer, titled “Europe and Islam: Crescent Waxing, Cultures Clashing”. According to Savage, the world of Islam may do more to define and shape Europe in the twenty-first century than the United States, Russia, or even the European Union. The Islamic challenge that Europe faces today is twofold: Internally, Europe must integrate a ghettoized, but rapidly growing Muslim minority, that many Europeans view as encroaching upon the collective identity and public values of European society. Externally, Europe needs to devise a viable approach to the primarily Muslim-populated volatile states, stretching from Casablanca to the Caucasus, that are a currently focus of the EU’s recently adopted security strategy. Mr. Savage warns that the European-Islamic nexus is spinning off a variety of new phenomena, including the rise of terrorism; for instance, the emergence of a new kind of anti-Semitism; the shift of established European political parties to the right and the recalibration of European national political calculations.

According to Timothy Savage’s study, Europe’s track record of engagement with Islam over the last 1,350 years is not very encouraging. Although trying to explore some new initiatives, Europeans seem still inclined to pursue a status quo approach, at home and abroad, preferring caution, predictability, control, and established structures over the required boldness, adaptability, engagement, and redefined relationships that the new demographic challenges require. A similar mind-set is evident among Europe’s Muslim population. With more than 23 million Muslims residing currently in Europe, already comprising nearly 5 percent of the population, the danger exists that, if suitable accommodation is not reached in time, current dynamics will likely yield a Europe, that not only faces increased social strife, national retrenchment, and even civil conflict domestically, but also could well succumb to a “Fortress Europe” posture, signaling even its political decline on the international stage.