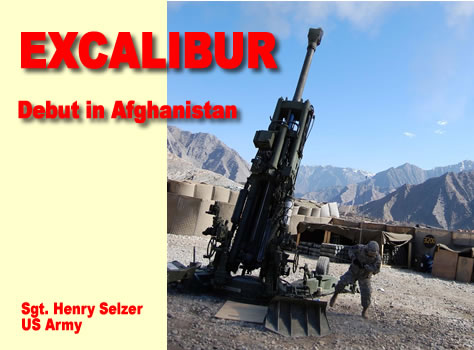 Soldiers fired the first 155mm GPS-guided Excalibur artillery round in Afghanistan Feb. 25. The Excalibur was fired using the M-777A2 155mm howitzer. The M-777 is designed to be a digitally programmed weapon and is about 9,800 pounds lighter than the more commonly used M-198 Howitzer and is reportedly more accurate. The fuze setting was performed by Enhanced Portable Inductive Artillery Fuse Setter, placed on the tip of the round, sending a digital message containing the coordinate for the round to find.

“The main purpose of the M-777A2 is that it is more able to help the units in the Korengal Valley by providing more timely and accurate fire,” said Army Capt. Ryan Berdiner, 28, commander of C Battery, 3rd Bn., 321st FAR.” By using the Excalibur, we are mitigating a lot of collateral damage that other rounds may cause,” said Scott. “The Excalibur round travels farther and is designed to hit targets that conventional ammo does not always hit,” said Army Staff Sgt. Darius Scott of C Battery, 3rd Battalion, 321st Field Artillery Regiment.