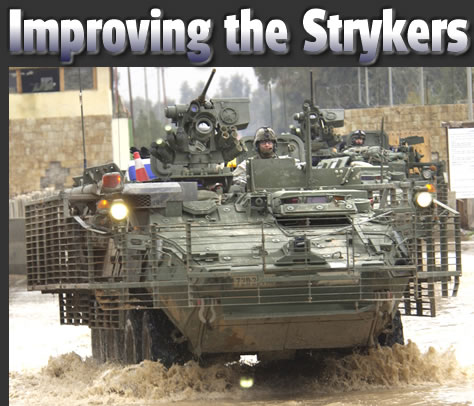 The US Army plans to improve its fleet of Stryker vehicles wit hthe introduction of improved suspension, increased power generation and distribution, implemented by new power management systems. According to COL Christopher Lockhart, TRADOC Capability Manager, Stryker Brigade Combat Team, since the deployment of Stryker Brigade Combat Team (SBCT) in Iraq, Stryker vehicles have been continuously fitted with new electronic systems, including power guzzling Improvised Explosive Devices (IED) jammers and gunshot detection systems. These systems rapidly drain the vehicle’s power reserves, particularly when operating ‘Silent Watch’ with engine turned off. To sustain Silent Watch over extended periods, the introduction of an on-board auxiliary power unit is planned. The suspension will be improved to sustain loads up to 24-27 metric tons (55,000-60,000 lbs.) Lockhart presented the Stryker upgrade path to the audience of the IDGA Tactical Vehicles summit held in Washington DC in April 08. Defense Update was one of the media sponsors of this event.

Another planned improvement will be the addition of semi-active suspension, which will be able to compensate for the increase in weight. Survivability enhancements will include modifications reshaping the hull into a shallow V-shaped structure, additional armor for the sides, front (driver protection). An active protection system, probably a derivative of the Raytheon Quick Kill system developed for Future Combat Systems (FCS) is planned.

The vehicle will also receive peripheral video surveillance providing36020 degree situational awareness, a gunshot detection kit and non-flammable tires, and mine-blast attenuating seats to improve protection for the crew. The vehicle’s weapon station will also be improved with 3rd generation thermal viewer and stabilization, enabling the engagement of targets at longer range. Extended range capability will also be improved with the introduction of Javelin weapon capability. A new databus infrastructure will provide better connectivity for electronic systems. These systems are expected to be compatible with FCS systems, as they will be based on FCS Spin-off technologies. The new system will enable reception and control of remotely operated systems such as Unmanned Aerial Vhicles (UAV)s and Unmanned Ground Vehicles (UGV)s. The system will include the latest versions of Battle Command software and will have embedded Force XXI Battle Command Brigade and Below (FBCB2) providing better situational awareness and common operating picture.

At AUSA 2007 General Dynamics Land Systems (GDLS) unveiled an upgrade package for the Stryker and LAV-III addresing many of the Army’s requirements. The upgrade designated ‘LAV-H’, is proposed to be undertaken as part of major post-combat reset reconditioning. Under the process, the vehicle’s automotive and power plant systems will be upgraded to support a 25% Gross Vehicle Weight increase from the current 42,000 to 55,000 lbs. (25 tons). The vehicle’s curb weight will be 29,000 lbs (13.2 tons). As part of such upgrade, GDLS intends to install a Caterpillar C7 engine and Allison 3200SP transmission.

Addressing the growing demand for on-board power, a new 500 Amp alternator will be installed, coupled with an expandable and scalable solid-state power distribution and control system. An optional Lithium-ion battery pack could nearly double electrical power storage capacity on board, with the same space claim as the standard vehicle battery pack. The crew will be able to exhaust nearly all battery power without having engine restart failures, relying on the 24V Capacitive Start System offering power reserve for the engine starter, independent of the main battery. The vehicle was demonstrated at AUSA 2007 with a Protector Weapon station mounting a heavy machine gun and a Javelin missile launcher.

The upgrade also includes a significant increase in protection, with the introduction of enhanced belly protection, hull modifications include reshaped V profile for improved blast resistance. Externally, large appliqué armor modules and redesigned hatches are introduced, improving protection and minimizing vulnerability, caused at the seams between armor modules. Externally and internally, the vehicle has better protection against IEDs, for example, with the introduction of blasts absorbing mine resistant seats (or benches).