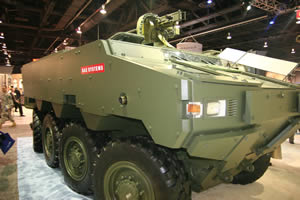 A version of the US Army TUSK upgrade kit for the M-1A2 was on display at AUSA 2007. This version is fitted with two Remote Weapon Stations and a second coax machine gun, mounted over the main 120mm gun. To further improve the tank’s performance in asymmetric warfare GD ATP introduced two types of ammunition for the main gun – the M-1028 Canister round and a high explosive round, coproduced with Nammo.

The M-1028 Canister round is providing effective anti-personnel capability for the Abrams tank. This ammunition is uniquely effective at very short range, as it discharges massive blast of tungsten ball fragments at the muzzle exit, effective up to a range of 500 meters. The canister round weighs 50.5 pounds (22.9 kg) which is about half the weight of the Flechette that uses small darts, effective at a longer range. Another round being introduced for the 120mm cannon is the 120mm high explosive (IM-HE-T), improving the tank’s performance in direct fire support. This cartridge weighs 25 kg, and packs over twice the explosive weight, compared to standard High Explosive Anti-Tank (HEAT) rounds. The projectile weighs 16 kg and contains 3.2 kg of Insensitive-Munition (IM) type high explosive contained in a fragmenting shell body, triggered by a Point Detonating (PD) or delay fuse, ensuring target penetration. ATP is offering this round based on its cooperation with Nammo.

General Dynamics Land Systems introduced a major upgrade for the Light Armored Vehicle (LAV) design, which could be implemented as a mid-life upgrade for US Army Stryker as well as LAV 3s, currently operational with the US Marine Corps and the armies of Canada and New Zealand. The upgrade designated ‘LAV-H’, is proposed to be undertaken as part of major post-combat reset reconditioning. Under the process, the vehicle’s automotive and power plant systems will be upgraded to support a 25% Gross Vehicle Weight increase from the current 42,000 to 55,000 lbs. (25 tons). The vehicle’s curb weight will be 29,000 lbs (13.2 tons). As part of such upgrade, GDLS intends to install a Caterpillar C7 engine and Allison 3200SP transmission.

Addressing the growing demand for on-board power, a new 500 Amp alternator will be installed, coupled with an expandable and scalable solid-state power distribution and control system. An optional Lithium-ion battery pack could nearly double electrical power storage capacity on board, with the same space claim as the standard vehicle battery pack. The crew will be able to exhaust nearly all battery power without having engine restart failures, relying on the 24V Capacitive Start System offering power reserve for the engine starter, independent of the main battery. The vehicle was demonstrated at AUSA 2007 with a Protector Weapon station mounting a heavy machine gun and a Javelin missile launcher.

The upgrade also includes a significant increase in protection, with the introduction of enhanced belly protection, hull modifications include reshaped V profile for improved blast resistance. Externally, large appliqué armor modules and redesigned hatches are introduced, improving protection and minimizing vulnerability, caused at the seams between armor modules. Externally and internally, the vehicle has better protection against IEDs, for example, with the introduction of blasts absorbing mine resistant seats (or benches).

General Dynamics Land Systems-Canada delivered the first LAV-A2 to the US Marine Corps, The A2 is an updated version of the Marines’ Light Armored Vehicle series, which has been in use since the 1980s. In February 2006 GDLS Canada was awarded a contract to upgrade 157 LAVs in six variants, into A2 version. These variants included LAV-25, anti-tank, command & control, logistics, mortar and Nuclear, Biological and Chemical Reconnaissance System (NBCRS). The upgraded vehicles are fitted with an improved suspension, and are readied to receive enhanced armor protection. New safety precautions include an automatic fire suppression system for crew protection.

BAE Systems Hagglunds introduced their SEP 8×8 vehicle at AUSA 2007. This platform is a larger version of the wheeled SEP 6×6 developed as the ‘next generation military vehicle system’ program funded by the Swedish Defence Materiel Administration (FMV). According to BAE Hagglunds plans, SEP 8×8 could be available for delivery by 2011. SEP is built on a modular platform, enabling growth potential and adaptation to a wide range of applications. Unlike the 6×6 version, SEP 8×8 uses mechanical transmission, designed to meet FRES requirements. Other SEP family vehicles use electronic transmission. SEP 8×8 was configured as a wheeled armored vehicle with a full combat weight of 24 – 27 tons (curb weight in an APC version is 14.5 tons). This version was originally designed by BAE Systems Hagglunds, competing with the Piranha V, Boxer and VBCI for the British FRES program, but eventually dropped after trials.

Saab Barracuda highlighted its Heat Transfer Reduction HTR material, originally used to diminish the vehicle’s visual and thermal signature, HTR pragmatically reduces the temperatures inside the vehicles, resulting in less fatigue on warfighters and improve durability and reliability of electronic equipment. A positive side effect is the lesser need for air-conditioning, further impacting power and fuel consumption. Saab Barracuda is currently promoting HTR in the US, after delivering thousands of systems to military users in Australia, Canada, France, Italy, Sweden, UAE and the UK.