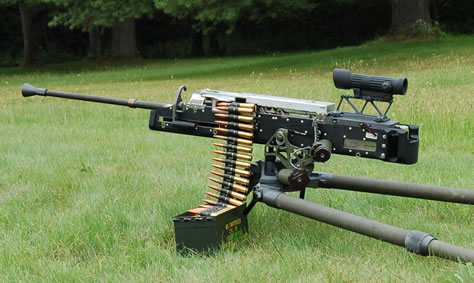 General Dynamics Armament and Technical Products (GDATP) received a $9 million U.S. Army contract to develop a lightweight .50 Caliber (12.7mm) machine gun (LW50MG) weapon system. The new lightweight weapon will end the 75 years era dominated by the Browning M2HB heavy machine gun (nicknamed ‘Ma Duce’) crew served weapon, used for vehicle, ship, aircraft and portable applications. The new weapon is different from the XM312 which was previously evaluated by the Army. It is significantly lighter and has less recoil than the current M2HB.

The new machine gun is expected to weigh about 53 pounds (with ground mount system) – 75 pounds less than a combat-ready ‘Ma Duce’ (128 lbs). The LW50MG has 70 percent less recoil, which enables Soldiers to use weapon magnification sights they can put their eyes on, which was unthinkable and potentially painful, with the M2. Therefore, the new weapon is expected to be more accurate and lethal in combat.

The newcrew served weapon will be produced at the company’s Saco facility. Once the LW50MG is deployed, all vehicles that mount the M2 will be able to mount the new system. Tests have been successfully conducted mounting the system to the Stryker Combat Vehicle and the Common Remotely Operated Weapon Station (CROWS). “Our Lightweight .50 Caliber machine gun represents a new generation of weapon systems,” said Robert Cavoretto, senior program manager at GDATP.

The Army has recently issued a requirement for a lightweight .50 caliber machine gun. The Special Operations Command (SOCOM) also has a vehicle requirement for a lightweight/ low recoil weapon, but is also looking to expand use of the weapon for dismounted units. The LW50MG will not replace all M2HBs in service, but will offer a potential alternative to satisfy the needs of those three services in one package. The new weapon is expected to be ready for fielding by the end of Fiscal Year 2012, or sooner based on Army funding priorities. Light units, such as the 82nd Airborne Division, the 101st Airborne Division (Air Assault) and SOCOM forces are likely to be first to receive the LW50MG.