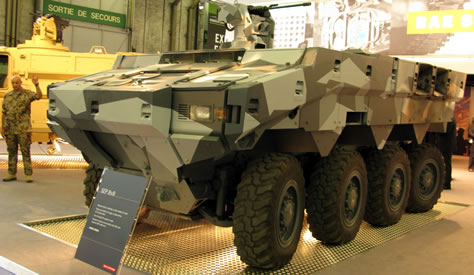 BAE Systems Hägglunds AB of Sweden brought the 8×8 SEP armored vehicle to Eurosatory despite the recent setback suffered at home, as a major procurement program of SEP vehicles was cancelled by the Swedish Ministry of Defense, after realizing the British MOD is going for the Piranha V alternative the Swedish MOD realized the program will be too expensive to go it alone. However, Hägglunds is hopeful the program could be resurrected, following a request for information released recently by the Swedish MOD, seeking information on similar vehicles offering flexible mission configuration, high level of protection, high reliability and affordable effective life cycle cost.

“SEP is answering all these requirements” Håkan Karlsson, the company’s V.P. Marketing told Defense Update. At Eurosatory Hägglunds is highlighting its high level of protection based on passive armor and the advanced armor concept based on IBD’s active protection system. A video shown at their stand depicts the activation of the vehicle’s protection module defeating an RPG few meters from the vehicle. Another prospect is also looming in the USA, with the US Marine Corps Medium Personnel Carrier (MPC) program to enter an open competition next year. Lockheed Martin has already teamed with Patria, to offer the AMV for this program. In comparison, BAE Systems is well positioned in the USA to pursue such program by itself. According to Karlsson, the SEP was evaluated and tested by the Marines earlier this year.