On February 4, 2008 Sweden has decided not to proceed with the development of the next-generation SEP family of armored combat vehicles. Joris Janssen Lok reported on Aviation Week’s Ares blog. According to armed forces procurement chief Leif Nylander, one of the main reasons for the decision was that neither Sweden nor BAE Systems have managed to find an international partner for the program, with whom Sweden could have shared the development cost. The Swedish Army planed to field a new Modular Armored Tactical System program (SEP) which will be based on common modular wheeled and tracked platforms configured for more than twenty different roles. These included armored personnel carrier, command post, ambulance, medical vehicle, anti-tank missile system, anti aircraft missile system, mortar vehicle, reconnaissance, forward observation vehicle, nuclear, biological and chemical warfare decontamination centre, mine clearing and mine scattering, recovery and repair, communication post, radar, electronic warfare etc.

The common chassis will have an electric transmission system, replacing the mechanical drive shafts with electrical cables, transferring the power from the engines to wheels. This transmission system has many advantages over existing mechanical systems, including volume and fuel efficiency, and increased stealth characteristics. Other benefits are reducing life cycle costs and environmental impact. Decoupled from the final drives, the engine can be mounted flexibly, including the use of distributed power sources (multiple engines). The batteries integrated into the electric drive system allow stealth movement on electrical power only, driving silently with the engines shut down. Another benefit of the electric drive is the increased useable internal volume. 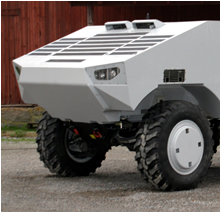 The new vehicles will comprise mission or role specific modules, fitted on common tracked or wheeled vehicles. These modules will be designed as “Plug in building blocks”, allowing fast adaptation to different tasks and quick upgrades as new technologies become available.

In a troop carrier role, a combat ready SEP will be able to carry a load of 4.5 tons, including 12 infantrymen. A space of 10 cubic meters will be available in a standard load carrying module, substantially larger than that of conventionally powered vehicle of a similar length. Fully laden, SEP will weigh 16.6 tones, carrying up to 6 tones of payload, at top speed of 100 kilometers per hour for the wheeled version and 85 km/h for the tracked variant.

The wheeled version, called “SEP-Wheeled” vehicle has three axles and uses 6×6 drives. The vehicle uses two engines driving an electric transmission, powering each wheel by a 100 kW maximum power permanent magnet, in-hub electric motors. The motors are fitted with a two speed reduction gear. This design offers high redundancy and survivability when operating in combat conditions.
The SEP uses two commercially available diesel engines placed in the sponsons of the vehicle. This gives the advantage of a totally clear central volume of the vehicle, compared with traditional designs built with large, centrally mounted engine compartments. The wheels are mounted with double cast-steel wishbones with short torsion bar spring. The front wheels are steered normally, the centre wheels are not steered and the rear wheels are steered to provide steering at low to medium speeds and to cut out the rear wheel steering at high road speeds to maintain high speed stability. The wheels are fitted with 405/70 type R24 tires. Using the electric drive has improved the vehicle’s stealth characteristics, in terms of thermal, acoustic and radar signatures.

The vehicle uses two 6 cylinder diesel engines in-line, developing 2×270 hp (2×200 kw) of power at 4000 RPM. Each engine is coupled to a 7 speed automatic transmission, driving a separate alternator generating 150 amperes. Steering is performed by 1 pr 2 axels, providing 18 meter turning diameter or all four axels, facilitating pivot maneuvers within a seven meter diameter (the vehicle’s length is six meters). The vehicle uses hydro-pneumatic suspension, offering several optional automotive systems designed to improve performance over different types of terrain, including automatic braking system (ABS), central tire inflation system and central leveling adjustment capability. SEP 8×8 will be able to carry a wide range of armament, including gun turrets (25 – 120mm) and mortars (81 – 120mm). While the 6×6 SEP is designed to be transportable inside a C130, the 8×8 version will have to be carried in the larger A-400M. The vehicle comes fitted with displays for the commander and driver, both seated side by side in the front. Integration with different electronic mission systems is also supported utilizing CAN bus multiplex data system for the vehicle’s automotive and maintenance systems and high speed Ethernet data network for tactical, C4ISR systems support.

The tracked vehicles are fitted with special rubber bandtracks (already used with Bv206 articulated carriers) rather than conventional steel link tracks. These tracks are lighter, quieter and have a operational life of about twice that of an equivalent steel linked track. The new bandtracks have a lower rolling resistance and are operating more efficiently with the electric transmission systems, yielding higher fuel efficiency. Another unique design feature is the underframe mounted suspension. This spaced outer layer gives improved protection against mines. The SEP vehicle can withstand a 7 kilogram TNT explosion under a track.

The use of bandtracks and decoupling the suspension from the side frames and hull dramatically reduces internal noise level to as low as 85dB, which is sufficiently low to meet civilian vehicle noise requirements. The vehicle uses a new electronic architecture developed by Hägglunds, based on an open scalable, fault tolerant databus which manages all the on-board systems and crew interfaces including the weapons systems, battlefield management, defensive aids suite, built in test, digital radio communications and other mission or role specific systems.

SEP T2 was delivered on November 22, 2005 to the Swedish defense Material Administration (FMV) by BAE Land Systems Hägglunds. According to Sven Kågevall, Managing Director of Land Systems Hägglund, SEP develops considerable international interest, from the UK, where it is considered for the British FRES project, EDA (the European Defense Agency of the EU), which restructures and coordinates the work of future defense products in Europe, as well as Norway and Australia.

SEP was displayed by BAE Systems Land Systems Hägglunds at the AUSA 2007 exhibition. At DSEi 2005 the company displayed its two new prototypes of wheeled and tracked chassis developed for the Swedish Defense Materiel Administration (FMV) Modular Armoured Tactical System (MATS) program. (also known as SEP – Splitterskyddad Enhets Plattform). SEP is currently under development for the Swedish defense Forces, under a 500 million Swedish Kronor contract awarded to BAE Hagglunds in 2006. This program includes the development of two 6×6 wheeled vehicles and two SEP tracked vehicles in troop transport and logistics carrier configurations. These vehicles will be configured in troop carrier and logistics vehicle configurations. The vehicles will weigh around 17-18 tons and will use electric drive or standard diesel engine. The Swedish Army is expected to buy at least 500 of the new vehicles, and have them operational by 2014.