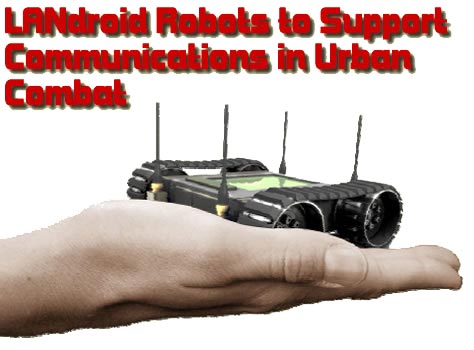 The US Defense Advanced Research Projects Agency (DARPA) is developing an array of ‘intelligent mini-robots’ called LANdroids, designed to operate in communications challenged areas, non-line-of sight (NLOS), conditions with extensive multipath, noise and interference, commonly encountered in dense urban environments. Operating in these conditions, multiple LANdroid robots will establish and extend communications support to forward elements as well as support other unmanned systems. In March 2008 DARPA awarded iRobot a contract to develop a ground communications relay robot as part of the LANdroids program. The agency is expected to award additional contracts to other developers to pursue parallel developments. The program will cover the development of the robotic platform, communications systems and control software.

LANdroids will be designed to operate continuously for extended periods (more than a week) operating as dynamic communications ‘hotspots’ serving various users on the battlefield. The small robot (sized as a deck of cards) will be hand emplaced at an initial ‘drop point’, from where it will scan the area for nearby LANdroids or familiar communications signals, dynamically establishing a ‘mesh network’ to support nearby radios.

The robot will have a limited mobility (speed of 0.5 m/sec) and autonomous (non GPS dependent) navigation and geolocation capability, enabling it to reposition itself to optimize communications coverage and support nearby troops. For example, when required, robots will be able follow troops inside a building, providing optimal communications through several levels and inside enclosed walls and rooms by establishing multiple relay points along the way. One or more robots will secure positions where optimal communications with a nearby vehicles facilitate ‘gateway’ to the entire network.

These low cost (less than $100 apiece) LANdroids will be deployed in large numbers, establishing reconfigurable communications backbone or a ‘mesh’ to support operations. This robot will be small enough that a single dismounted warfighter can carry multiple robots, inexpensive to the point of being disposable, robust enough to allow the warfighter to drop and throw them into position, and smart enough to autonomously detect and avoid obstacles while navigating in the urban environment. 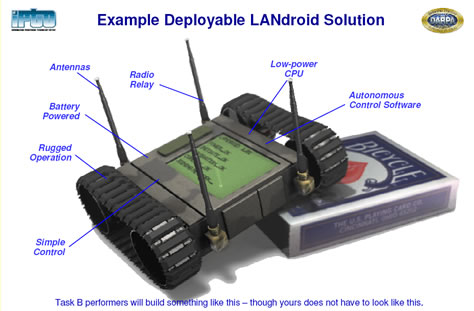