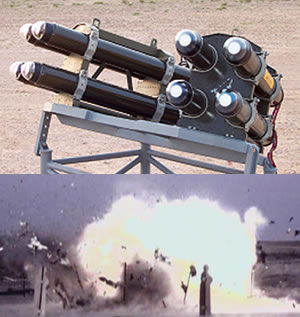 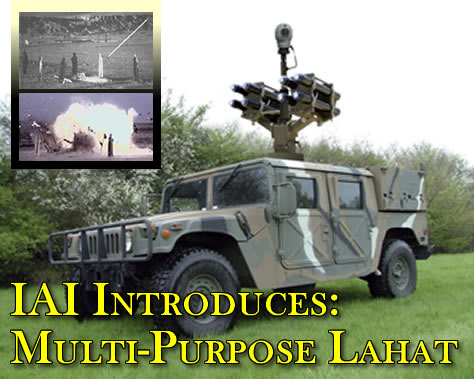 IAI is unveiling at Eurosatory 2008 a long awaited multi-purpose version of the Lahat missile, designed to defeat ‘soft’ targets. Initially, the lightweight (12.5 kg) Lahat missile was equipped with a shaped charge an anti-tank warhead weighing 2.5 kg. This warhead is capable of penetrating up to 800 mm of steel armor. The new warhead weighs the same but uses a fragmentation sleeve fitted to a smaller shaped charge designed to create both armor penetrating and blast fragmentation effects. The new warhead developed by Israel Military Industries (IMI) is effective against exposed human targets, soft (unarmored) vehicles and light armored vehicles. Standard shaped charge warheads are not effective against soft targets due
to their ‘surgical’ highly directional effect.

In addition, IAI is offering the new missile as part of an innovative force protection application, which could be employed to protect coalition force, forward operating bases in Afghanistan and Iraq, or other ‘hot’ border areas. In this application, unmanned Lahat missile stacks are maintained in fixed installations, each carrying eight missiles. Up to four units can be employed to cover the entire base perimeter, providing operating depth of several kilometers. The missiles are linked to existing area surveillance systems, operating at the base, comprising unattended and electro-optical sensors.

Forward operating bases are protected by unattended sensor arrays and electro-optical (EO) surveillance means. They also employ separate networks of base protection sensors, patrols, and combat fire support and air support assets. However, current means are frequently incapable responding to sporadic insurgent attacks. While electro-optical systems in observations, UAVs, or surveillance aircraft frequently detect and identify insurgents, setting up mortar or rocket launchers to attack, defenders repeatedly fail to perform target hand-over from the observation, spotting the target,
through the command post authorizing the attack, to the target acquisition system tracking the target and direct a weapon to destroy it. Clearing complex fire safety procedures through the chain of command only add to the complexity, especially when adhering to strict rules of engagement, typical in ‘asymmetric warfare’. Since observation systems are not usually associated with integral weapons, such ‘kill chains’ are slow to react, frequently enabling insurgents to fire their weapons and escape before the defender reacts and opens fire.

IAI is introducing a new dimension into the ‘sensor-to-shooter’ cycle, since its new Lahat will empower the ‘sensor’ elements to perform target acquisition and designation, while being capable of immediate responding to time-critical targets. By associating the target in-sight with the remotely launched LAHAT missile, using the laser designator attached to the EO payload, the system is transforming the ‘sensor’ into a ‘trigger’. 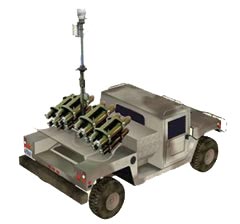 The key to this new implementation are weapon-allocation rules (algorithms) developed at IAI, based on the company’s long experience with air defense systems. These rules are matching the best available missile with the associated target, considering location, distance, response time, direction of attack, nearby friendly forces etc. According to Ofer Doron, marketing manager of IAI/MBT missile systems & Space Group, recent demonstrations performed with the new Lahat proved its ability to accurately and effectively defeat a group of exposed soft (human like) targets, utilizing low-angle (ground bound) target designation. The small warhead is optimized to defeat the target while maintaining relatively limited peripheral effect reducing collateral damage.

According to Doron, the Lahat is designed to operate under all weather conditions and could attack any target visible to the electro-optical sensor. IAI carries the Lahat concept further into a new method of fire support by precision laser guided weapons, where 24 Lahat missiles are installed on a vehicular platform, carrying a communications system and electro-optical payloads on a telescopic mast. Multiple units could be positioned to cover the field of operation, fire missiles in support of infantry units operating in its area.

Similar to the force protection Lahat concept, the ‘trigger’ will be activated by the supported unit, where the infantry calling for support will command the launch and designate the target to be attacked. Each vehicle could support units beyond line of sight, at ranges of up to eight kilometers, using anti-tank or multi-purpose missiles depending on the effect required. The missile unit could also attack targets within line-of-sight autonomously using its own sensors.