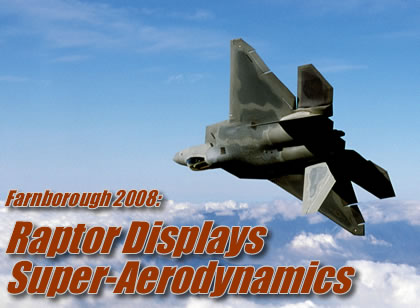 In a breathtaking demonstration of aerodynamics and power, the Lockheed Martin F-22 Raptor air dominance fighter claimed an uncontested position as a ‘superfighter’, streaking through the skies in a set of impressive maneuvers flown over Farnborough. “The display performed here is not unique airshow stunt” says Alan Norman, senior experimental test pilot at Lockheed Martin. “We performed here regular maneuvers flown by Raptor pilots as part of their air combat maneuvering.” The Raptor demonstrated only a small part of its performance, highlighting a ‘close combat’ scenario hitherto left shaded by the fighter’s air dominance capabilities.

The display highlighted ‘close combat’ scenarios hitherto unclaimed by the air dominance fighters, since it was assumed that Raptors will have the upper hand in any engagement even before it rolls down into close air-combat, through the use of superior situational picture and Beyond Visual Range (BVR) weapons.

“Like most air combat engagements, it tends to end in a dogfight and that’s where Raptor excels” says Larry Lawson, executive vice president, general manager of the F/A-22 Raptor program. Taking advantage of the aircraft closely integrated flight and propulsion control of the thrust-vectored engines, Raptor pilots can point the aircraft nose, fly to any direction and launch their weapons through a wide envelope, unmatched by any contemporary adversary. Situational awareness can be shared by several Raptors, based on information provided by each of the fighters through the intra-flight networking.

Introduction of new datalinks is planned for the next upgrade phase could link Raptors with F-35s and B-2s, expanding sensor sharing and situational awareness capbility beyond the F-22 own flight. Future upgrades could also include the re-introduction of the JHMCS helmet-mounted display sight absent from current Raptors, as the fighters were previously considered primarily for BVR engagements. (this is the reason why the AIM-9X hasn’t been integrated onto the aircraft yet) .

Another enhancement is currently underway as the F-22 is being evaluated in the ground-attack with flight testing of Raptors carrying Small Diameter Bomb (SDB) in their weapons bay. With the completion of this task the Raptor will be able to assume part of the missions reserved in the past for the F-117A stealth strike fighter.During recent force-on-force exercises, including Red Flag in Nevada, and Northern Edge in Alaska, Raptors ‘cleaned up’ the skies from enemy ‘aggressors’ soon after the battle started, leaving many ‘unemployed’ Raptors airborne and many frustrated aggressor aloft, “we have counseling for them” jokes Lawson. Overall, Northern Edge ended in an exchange ratio of 80 adversary kills for each Raptor ‘downed ’.

Meanwhile, air combat skills are developed for the F-22 community at the new air combat fighter weapon school at Nellis AFB, where unique operational tactics are developed, examined and trained by Raptor pilots. These tactics employ the fighter’s unique performance and ability to operate in loose formations (maintaining large distance between fighters), relying on their collaborative situational picture, super-aerodynamics and stealth.

Sofar fighter pilots would be assigned to the F-22 after flying F-15s, going through 100 F-22 flight simulator missions. However, according to Lawson, the Raptor proves quite easy to fly and is also planned for less experienced pilots. New pilots are already being trained at Tyndall AFB, the F-22 training center, to fly the Raptor as their first fighter aircraft.

Lockheed Martin already provided 122 Raptors operating from bases in Langley, Virginia and Elmendorf, Alaska. The third unit was launched recently at Holloman AFB, New mexico with Hickam, in Hawaii expected to become the fourth home for the Raptors. The entire fleet accumulates flight hours rapidly, with a total of 47,220 flight hours flown through 32,509 sorties to since the aircraft entered service. The F-22 fleet is expected to fly 21,951 hours throughout 2008, almost half of the entire flight time accumulated to date.

According to Lawson, out of the 122 fighters already delivered, “Seven out of ten aircraft were delivered with zero defects, highlighting the high maturity of the production line” said Lawson. Mission capable rate is currently standing at 70%, with 2.24 maintenance hours required for each flight hour.

However, the program’s future is not clear at present, and is not expected to be determined before the new administration is elected. While the air force is eager to get more Raptors, many lawmakers objected to support the program due to the high acquisition cost. This cost could even increase, if production lines are interrupted by lack of long-lead items . 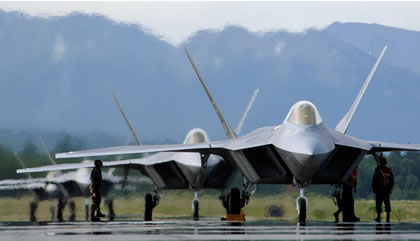