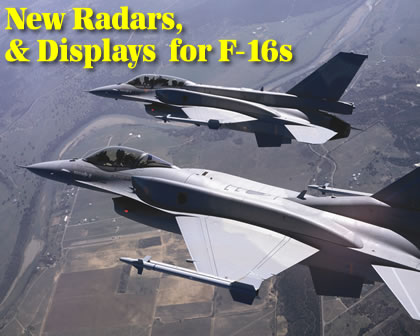 Despite the plans to replace the Falcons, the F-16 is not going away too soon, and several companies, primarily U.S. based are responding to requirements from current operators, to enhance the operational life of the aircraft and introduce new technologies that could extend its usability for many years. At Farnborough 08 Rayteon and Northrop Grumman displayed new radars, employing AESA technologies that could match the form and fit of current F-16 radars. Raytheon unveiled the Advanced Combat Radar (RACR), utilizing technologies derived from the APG-79 AESA radar used on the F/A-18E/F. 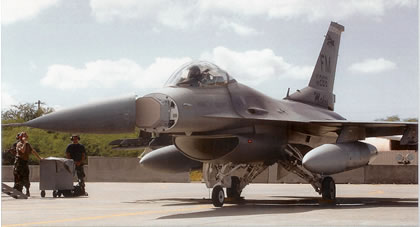 Designed for the fighter retrofit market, the new radar can be employed as ‘drop in’ upgrade for F-16s from Block 30 onward, as well as F/A-18C/Ds operating with several air forces worldwide. The radar is designed with modular approach using self-contained cooling and power management systems to accommodate the limited space available in the aircraft nose and forward sections in a ‘non intrusive’ installation, minimizing modification and installation cost.

Northrop Grumman displayed a model of its Scalable Agile Beam Radar (SABR) AESA radar, unveiled earlier this year in Singapore. This radar will fit into F-16s from Block 50/52 onward, as a drop-in replacement for the company’s APG-69 mechanically scanning radar set.

Another upgrade option from Raytheon is the replacement of backup flight instruments installed at the center of the cockpit with large, vertically mounted 6×8 inch multi-function color ‘Center Pedestal Display’ (CPD) unit. This display is optimally suitable to support situational awareness, digital map displays and video imaging which sofar suffered from lack of proper display capability in the cockpit. CPD is designed to operate in daylight and at night (NVIS) color modes. It is linked to the aircraft databus and communications systems, offering two-way situational awareness datalink (SADL) messaging.