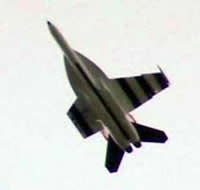 Can an airplane fly with part of its wing ripped off? Two decades after a young Israeli pilot made history by landing an F-15B after losing the starboard (right) wing after midair collision with an A-4H, the US Defense Advanced Research Projects Agency (DARPA) and Rockwell Collins are working on an new damage tolerant flight control technology that can automatically reconfigure the aircraft flight controls after significant loss of control due to battle damage.

DARPA’s Damage Tolerant Controls (DTC) program completed the most recent test series in April 08, culminating in a demonstration of recovery from loss of the majority of the right wing of a sub-scale F/A-18, verifying the ability of adaptive control methods to continue control of an aerial platform in the event of battle damage. According to DARPA’s Program Manager Lt. Col. Jim McCormick, the system provides an autonomous aerial vehicle an ‘air sense’ that would allow them to deal with the unexpected, the way a human pilot might. “Damage tolerance approach will reduce the burden of training on our operators, limit the impact of pilot error, and lessen our dependence on pre-positioned ground equipment.” Col. Don Hazelwood, Project Manager for Army Unmanned Aircraft Systems.

During the recent test, an F/A-18 sub-scale model equipped with the flight control system developed by Rockwell Collins demonstrated safe recovery from catastrophic wing damage, as it regained stable flight within seconds after losing its right wing. Over the next few minutes the flight control system reconfigured itself to restore most of the original flight quality, allowing the aircraft to complete a flawless autonomous touchdown. The next phase will integrate damage tolerance into an operational unmanned air system, paving the way for future fielding of this unconventional capability.