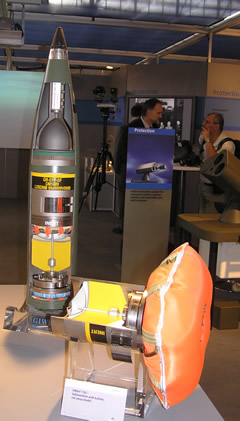 SMArt 155 (DM702) is produced by GIWS – a subsidiary of Diehl and Rheinmetall. SMArt is an intelligent, autonomous fire and forget artillery projectile designed to accurately engage stationary or mobile battlefield targets. By utilizing smart Submunitions, such targets can be engaged with standard artillery units, at significant range and high kill efficiency.

Each SMART 155 munition is composed of two sensor fused submunitions designed for automatic target acquisition and engagement by an Explosively Forged Penetrator (EFP). After the submunitions are expulsed from the shell case, opening parachutes and arm the warheads, each weapon scans a specific sector in a spiraling pattern, as it auto-rotates under a parachute, scanning the area underneath it with IR and mm radar or millimeter wave radiometer sensor. Once positive indication of a target is provided by both sensors, an aim point is calculated and the EFP is activated, attacking the target from above. According to the manufacturer, The SMArt 155’s fusion of signal processed from IR sensors, radiometers and active radars is spanning a broad range of wavelengths, performs well in adverse conditions such as fog, smoke or precipitation; conditions that impede the performance of single sensors or single wavelength suites of sensors.

The 47 kg Smart 155 round is designed for 155mm guns including M-109/39 and M109/47 and PzH-2000/52 and Paladin self propelled artillery reaching 22.5 (39/47) up to 27.5 km (155/52). The Smart Submunitions are also applicable for MLRS rockets and aerial dispensers, as well as sensor fused ground mines activated by IR, Milimeter Wave (mmw) Radar or acoustic triggering. SMART is fielded with the armied of Germany, Switzerland and Greece. Additional countries are evaluating the weapon, among them the UAE. In a recent test, SMART ammunition was fired from a UAE G6 self-propelled howitzer and scored kills of 67 percent of the armored target. Test results also show that the SMArt(R) 155 is capable of distinguishing a hot target from a cold background as well as a cold target from a hot background. This functionality is particularly important in desert climates with “crossover” times of day that can impact thermal imaging performance. ATK is teamed with GIWS to market and produce the SMArt if selected by the US Forces.

In the UK, SMArt was proposed for the Royal Artillery’s a Guided Artillery Ammunition (GAA) program, part of the Indirect Fire Precision Attack (IFPA) program. The team proposing the SMArt included RO Defense, Rheinmetall Defense and Raytheon . In November 2007 the MoD announced a first order for these munitions. They will be fired from current or future 155mm howitzers, and effectively engage targets at maximum range greater than 45km (with 155/52cal guns) at an accuracy of less than 20m’ CEP.

The projectile will reach this range by determining the specific flight trajectory using inertial sensors and GPS guided flight, utilizing canards deployed at the highest point of its ballistic trajectory (apogee). The mid-course trajectory will be optimized for range and time of arrival, while the terminal trajectory will be optimized for the type of warhead – either direct impact or submunition dispensing. Such accuracy enables firing at close proximity with friendly forces, and in scenarios where rules of engagement prohibit the use of wide area fire missions. GAA will be offered with two payload options – the SMArt Sensor Fused Munition (BSFM) or a new combined effect Blast Fragmentation submunition, designed by BAE-Royal Ordnance.