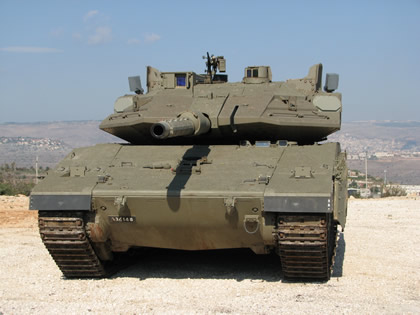 Speaking at the ‘Land Maneuver in the 21st Century’ conference, Col. Yizhak Elimelech, head of Land R&D Division at the Ground Forces Command said that passive (armor) protection has reached the top. Any further addition of armor protection endangers degrading the platform’s performance. The IDF identified this trend 20 years ago and launched the development of active protection systems which are now matured for fielding. “Such a system transforms the tank from “prey into hunter”, as active protection provides the crew a better situational picture, highlighting battlefield threats in real time, and enabling rapid engagement and elimination of such threats, before they come into effect.

The ground forces command launched a comprehensive program to improve the survivability of the forces, addressing the ever growing capabilities of weapons and methods, employed by all symmetric and asymmetric threats. While improving the armor protection for vehicles and personnel is central to this approach, thorough consideration is given to other survivability aspects, like, pre-emption by standoff detection and avoidance of potential threats, denying target acquisition, disruption, suppression and elimination of threats.

Obtaining a higher level of survivability and maneuverability, such units will be better prepared to pull enemy forces out of their hideouts, through movement, fire and surprise. By engaging enemy forces at their hideouts, conventional forces can better engage targets in an ’empty battlefield’, where guerrilla forces remain hidden until being threatened or directly engaged. The IDF plans to utilize rapid target location and engagement processing, already employed in counter-terror activity, to dramatically reduce the life span of enemy targets as soon as they expose themselves and open fire.

Units prepared for ‘Land Dominance’ will be equipped and trained to operate as tightly synchronized and coordinated elements. Employing networked sensors, such as radars, electro-optical systems and gunshot locators etc) they will be able to rapidly and accurately locate and engage threats. Such capabilities will be provided both at the unit level as well as the individual units.

While the IDF has already established highly capable air mobile elements and have demonstrated the capability to launch brigade scale air-mobile operations, land-maneuver capability will be provided by a balanced force of heavy armored vehicles. According to the Brig. General Yaron Livnat, head of the MoD Merkava tank directorate, the IDF is planning to balance between the key maneuver force’s elements, through measured procurement of Merkava Mk4 tanks balancing it with the acquisition of a significant number of Namer Armored Infantry Fighting Vehicles (AIFV) currently being built.

Namer AIFV are designed to operate well both individually and as a unit, equipped with mobility, firepower, protection, sensors, command and control to effectively pursue missions independently (at the individual vehicle level) as well as part of a networked operation. According to Gen. Livnat, the program has now been established to sustain continued production of tanks and AIFVs through the year 2020, which is necessary to ensure production capacity and availability of long lead time elements (engines, ballistic steel etc.) for the Merkava/Namer program. To enable troops to take advantage of the advanced capabilities of these vehicles, they are being provided with comprehensive training and logistical support.

In parallel to the protection of individual combat elements such as tanks, AIFVs and dismounted warfighters, the IDF is seeking to improve the protection for entire combat units, including command, and combat service support vehicles. This enables continuous support for combat units throughout the battlefield. Such protection ‘services’ will be provided with a dedicated platform capable of detecting, countering and defeating incoming threats affecting the protected unit while stationary, or on the move. Operating in a manner similar to a mobile air defense, such platforms will be fitted with sensors and networked elements to provide early warning of potential threats. Based on intelligence reports and real-time sensor data, the system will be able to warn the forces about missile ambushes, Improvised Explosive Devices (IED) or mines, planted along the road. The platform will also employ various IED and mine-defeating systems to counter potential threats. Moreover, this platform will also provide protection against anti-tank missiles or RPGs launched against members of the protected unit, employing active protection means designed to protect light armored or unarmored vehicles over a large area.

A typical system considered for such ‘flank protection’ is the Tactical Amphibious Ground Support system (TAGS) robotic vehicle, which has already been tested equipped with sensors and remotely controlled weapon station.