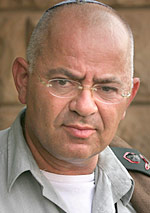 Major. General (ret) Yair Naveh, former commander of the IDF Central Command during 2005-2007, outlined at the ‘2nd Latrun Conference for Land Warfare’ some of the lessons learned after the 2006 war, offering some of his recommendations for the ground forces command. Following the conference theme, General Naveh considers the land maneuver as the ONLY option Israel can use to win in future conflicts. “There are different approaches to the Golan, Lebanon and Gaza fronts, but all theaters require a significant, powerful, short and decisive land maneuver, at the operational level – such maneuver should be employed with fire, primarily precision fire.” said Naveh.

From Combined Forces to Organic Assets

“The modern battlefield is not homogenous as it used to be”, General Naveh indicated, “a target set usually includes a mix of armored, fortified, mobile, underground, commando and irregular elements, armed with stand-off, and close-in anti-tank weapons and Improvised Explosive Devices (IED), operating in close vicinity, or within the civilian population. Therefore, all the means necessary to conduct battle under all these different scenarios, should be ‘owned’ as organic assets by the unit (brigade).”

This concept stands in contrast to the traditional, Modular ‘combined arms’ approach, currently employed by the IDF, where specialized assets are allocated by higher echelons, for specific tasks. Naveh’s approach has already been implemented by the US Brigade Combat Team concept, but tested to a limited scale by the modular IDF ‘Yata’ battalion, designed specifically for asymmetric warfare. “Future land operations should not rely solely on tanks or infantry, but the brigade should determine, according to the operational scenario ordered, which element should lead the force” General Naveh added. Therefore, tank or infantry units should lead the brigade and shape its entire operational plan.

Overall, Gen. Naveh favors the return of heavy armored vehicles, as operations are facing numerous, more capable anti-armor threats. General Naveh considers the new Namer AIFVs being fielded with the Golani brigade an essential protection, facilitating their mobility in areas dominated by anti-tank and IEDs. “Threats prevailing in an urban terrain are different from those encountered in open area” says Naveh.

“An AIFV should adapt for both terrain options; relying on tanks only does not provide an effective answer to the challenges of urban area, as they lack the mobility and capability to engage target at elevated angles. I would rather enter an urban area with a minimum number of tanks and provide mobility and support for the infantry by a dedicated armored vehicle, more adaptable for urban warfare” He added.

Modern tactical intelligence should be enhanced and adapted to provide target intelligence, in addition to its traditional role, this should be regarded as a pre-requisite for the deployment of precision guided munitions (PGM).

Overall, General Naveh calls for further improvement of ‘sensor to shooter’ kill chains, already established at the IDF counter-terror operations. An essential component of modern land maneuver battle is the employment of effective, precise firepower to create decisive effects only where they count, maintaining collateral low and minimizing the risk for friendly forces. A key for such capabilities is the transformation of statistical fire into ‘cost effective precision fire’. Naveh did not elaborate on how this could be achieved, but indicated that “the C4ISR is already in place for such capabilities”.

To facilitate better targeting for maneuver forces, new sensors and intelligence collection elements such as tactical UAVs are being fielded. However, to employ them to their full extent, the IDF and Israel Air Force (IAF) should reach a compromise about airspace management. “The land component should share responsibility and control of the aerial dimension over the battle area, a factor now controlled exclusively by the air force. This requirement will be more critical in future operations, as the IDF plans to field UAVs at battalion, brigade and division levels, providing critical capabilities to the lower echelons.

Affordable PGM for the Lower Echelon

To further extend direct support by PGM, Naveh recommends an extensive deployment of laser designators at the lowest operational level. However, Naveh indicated that guided weapons should be of low-cost and simple to operate. “The IDF focus on ‘high end’ very accurate but expensive Electro-Optical guided weapons should be offset by simpler, more affordable GPS and laser guided weapons. Laser guidance is particularly suitable for short-range engagement, where targets are usually in sight.” Another factor is the high proficiency level required for the weapons operator. “Employing laser guided weapons require a single person and a single skill in the loop” says Naveh.

He considers electro-optical (EO) guided weapons an essential asset for the division and corps level, where such capabilities become an operational and strategically determinant factor. “EO guided weapons should only be used, after lower cost alternatives are discarded.” said Naveh. He recommends fielding a mix of weapons employing different guidance systems to match a wide range of operational and strategic requirements – “The lower echelon needs a simple and accurate weapon that could be easily integrated within existing forces” said Naveh.

He explained that EO guided weapons are more suitable for divisional and territorial command operations since their operation requires specialized operators and the high “cost per kill” could be justified only by eliminating high priority targets, prioritized by the higher echelons. “Guided to accurately attack a specific location, GPS guided weapons would be most suitable for the attack of fixed targets. The more advanced ‘smart GPS’ combining at least two types of seekers, will be best to pursue illusive targets such as Surface/Surface missile launchers.” said Naveh.