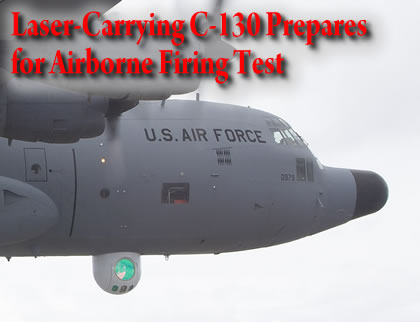 The beam control system acquired a ground target and guided the laser beam to the target, as directed by ATL’s battle management system. The laser passes through a rotating turret on the aircraft’s belly. After conducting additional ground tests, the aircraft will demonstrate the system’s military utility by firing the laser in-flight at mission-representative ground targets later this year. On May 13, the high-energy laser was fired aboard the ATL aircraft for the first time, demonstrating reliable operations previously achieved in a laboratory. During that test, an onboard calorimeter captured the laser beam before it left the aircraft.

According to Scott Fancher, vice president and general manager of Boeing Missile Defense Systems, this ATL will be able to provide ultra-precision engagement capability that the warfighter needs to dramatically reduce collateral damage. The laser weapon will be capable of destroying, damaging or disabling targets with little to no collateral damage, supporting missions on the battlefield and in urban operations. Boeing’s ATL industry team includes L-3 Communications/Brashear, which made the laser turret, and HYTEC Inc., which made various structural elements of the weapon system.

In May 2008 another Boeing led team began testing a larger system known as Airborne Laser (ABL) designed for strategic missions. The ABL aircraft consists of a modified Boeing 747-400F whose back half holds the high-energy laser, designed and built by Northrop Grumman. The aircraft’s front half contains the beam control/fire control system, developed by Lockheed Martin, and the battle management system, provided by Boeing.

During a series of tests, the ABL’s missile defense capability will be evaluated, under a Missile Defense Agency (MDA) program. According to Fancher, a first ABL missile shoot-down demonstration is planned for 2009. The aircraft is currently stationed at Eduards Air Force Base, where its on-board laser systems are being activated, ensuring all high-energy chemical plumbing and laser beam directing elements have been properly integrated aboard the aircraft and is ready to produce enough power to destroy a ballistic missile. As the activation tests are complete, ground firings of the laser will commence, followed by flight tests of the entire ABL weapon system. The test phase will culminate in an airborne intercept test against a ballistic missile in 2009.