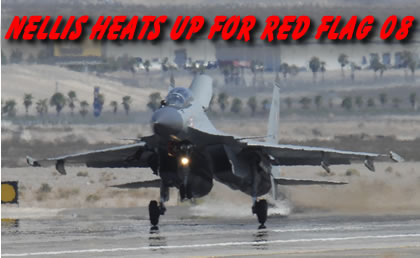 The last phase of 2008 Red Flag exercise began today (August 11, 2008) at Nellis U.S. Air Force base in Las Vegas, Nevada. The two week exercise will include, for the first time, a flight of Russian made, Indian Air Force Su-30 MKI fighters. The Slam eagle (F-15K) from the Republic of Korea is also making its debut at Red Flag. Other international members among the strike teams include the French air force Rafale fighters. Singapore Air Force F-16’s operating out of their training facility at Luke AFB in Arizona will also support the operation. The aircraft arrived here last week, and will participate in the exercise as part of the strike group, conducting air/ground missions.

While international participants are making the headlines, the majority of participants are naturally U.S. Air Force aircraft, is Red Flag will include multi-service and coalition aircraft, comprising some 80 aircraft ranging from the B-1B Lancer to the F-22A Raptor. The U.S. Navy will deploy its EA-6B Prowler to provide electronic combat support, Canadian C-130 and an airborne warning and control system aircraft from the United Kingdom will also support the operations.

The aircraft will be flying missions during the day and night to the 15,000 square-mile Nellis range where they will simulate an air and ground war. This Red Flag is a realistic combat training exercise involving the air forces of the United States, Canada, UK, France, South Korea and India. The first segment of Red Flag 08 included a British contingent of Typhoons. The second segment held last month involved 65 aircraft, hosting Swedish Gripen fighters from the Swedish Air Force, F-16s from Turkey and F-5s from Brazil. During this exercise, an F-15D flown by the 65th aggressor squadron commander Lt. Col. Thomas Bouley crashed killing Col. Bouley. An RAF pilot flying the back seat escaped with minor injuries.