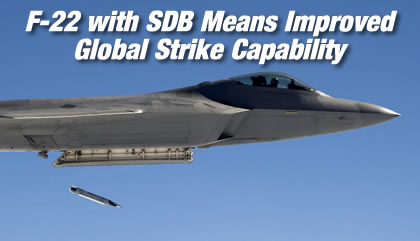 The F-22A Raptor is undergoing flight qualification at Edwards Air Force Base (AFB) where its capability suitability to carry and drop the GBU-39 Small Diameter Bomb is being evaluated. As part of the flight test program, weapons carriage and drop are performed through an enhanced flight envelope, including supersonic speed. In a recent test the F-22 Raptor dropped a 250 pound GBU-39 Small Diameter Bomb traveling at supersonic speed. This first supersonic SDB drop was part of a safe separation test currently being performed to integrate the bomb with the F-22.

“An SDB has never been dropped from a supersonic aircraft,” said Maj. Michael Starr, 411th FLTS test pilot. “Supersonic separation testing will give the F-22 the ability to drop the SDB at supersonic speeds, which synergistically enhances the Raptor’s air-to-air mission.” Currently, the F-15E Strike Eagle is the only aircraft outfitted with the SDB weapon system. On ‘Global Strike’ missions the F-22A’s currently takes two internally carried 1,000-pound Joint Direct Attack Munitions.

Configuring the Raptor for SDB will increase the number of precision weapons carried on each sortie up to eight, each individually programmed from the cockpit to strike a specific target. Furthermore, the SDB with its ‘diamond back’ glide kit can be launched from an extended stand-off range, further increasing the aircraft survivability.