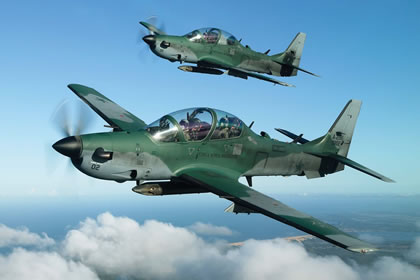 After Brazil and Columbia, Chile becomes the third Latin-American Country to fly the Brazilian Super-Tucano Trainer

Following the selection of the Brazilian Super Tucano in a public bid held by the Chilean Air Force (FACH), the Air Force will field 12 aircraft for tactical training missions. According to the contract signed between FACH and Embraer, the aircraft manufacturer, the first trainer should be delivered in the second half of 2009.

The Brazilian proposal chosen by the FACH includes a broad Integrated Logistic Support (ILS) package and an advanced Training and Operation Support System (TOSS), for the aircraft and ground support stations including the including the navigation and attack Mission Planning Station (MPS), Mission Debriefing Station (MDS) and Flight Simulator (FS). Super Tucano is currently operated by the air forces of Brazil and Colombia, where these aircraft are also used as light attack aircraft on internal security missions.

Embraer considers the choice of the Super Tucano by the Chilean Air Force as an opportunity to expand cooperation with the Chilean aviation industry, primarily Empresa Nacional de Aeronáutica de Chile – ENAER, established over ten years ago for developing the ERJ 145 regional jet.