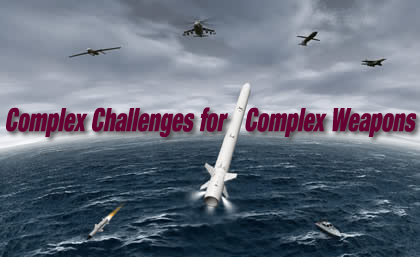 The UK Ministry of Defence (MoD) launched at the airshow a long-term cooperative strategy with the missile industries, aiming at streamlining of research, development and future acquisition of missile systems, defined under the common term as “Complex Weapons”. These are tactical weapons reliant upon guidance systems to achieve precision effects. Tactical complex weapons fall largely into five categories: Air-to-Air; Air Defense; Air to Surface; Anti-Ship/Submarine (including Torpedoes); and Surface to Surface. The new initiative is part of the Defense Industrial Strategy (DIS), announced in 2005.

MoD has launched the Assessment Phase for Team Complex Weapons (Team CW), under partnership with a UK based industry group including MBDA, Thales, QinetiQ and Roxel. The current assessment phase valued at around £74 million for the first year is expected to help defining future military requirements for the next generation guided weapons. This effort covers multiple contracts awarded to MBDA and Thales aiming at streamlining current missile development programs within the scope of a long-term partnering arrangement, aiming to better use approximately £6 billion expenditure in this sector over the next 10 years.

These programs will help assess a modular approach which has been developed for the delivery of future missile programs. This approach aims to reduce the number of different weapons in service by migrating to a smaller number of weapon families and variants with optimum modularity and re-use of sub-systems/technology. It has the potential to offer a greater level of capability while achieving value for money for MoD and maintaining UK operational sovereignty over the armed forces’ Complex Weapons.

Six ‘complex weapons’ projects are already underway at MBDA and Thales, under the CW umbrella, including the Fire Shadow Loitering Munition developed by the MBDA-led ‘Team LM’, development of a Sea-Skua successor for Future Anti-Surface Guided Weapon (Heavy) for Royal Navy helicopters (under development at MBDA). This new missile will become the lead member in a new 100Kg weapon family. MBDA is also developing a 50Kg weapon family, augmenting the current Brimstone, to meet Air-to-Ground Attack requirements (MBDA). An even lighter weapon included in the program is the Future Anti-Surface Guided Weapon (Light) developed for Royal Navy helicopters by Thales UK. An air defense system known as ‘ Future Local Area Air Defense System’ is also included in the complex weapons program, being a successor for the Sea Wolf, to be deployed on T23 Frigate and the Future Surface Combatant. This weapon will be a derivative of MBDA’s Common Anti-Air Modular Missile (CAMM). Other thrusts of the ‘Complex Weapons initiative focus on modernization and enhancement of existing systems, such as the Storm Shadow currently used on the Tornado GR4.

As the F-22 Raptor, F-35 Lightning II, unmanned aerial systems, and future aircraft platforms are envisaged over the next decade, the team believes that an advanced multi-role weapon requirement will emerge in the future that covers both the air-to-air and air-to-ground missions. A possible application for such weapons could be the Joint Dual-Role Air Dominance Missile System (JDRADM) considered as one of the future weapons for 5th Generation Fighters (F-22, F35) and unmanned combat aircraft. JDRADM is currently at an early concept development phase at Boeing, where future sensor and warhead designs are being evaluated. JDRADM will pack both air/air and air/ground capabilities in a single airframe. Boeing is already working on risk reduction programs to demonstrate key technologies associated with the dual-role warhead and terminal seeker, including the Seeker Integrated Target Endgame Sensor (SITES) guidance and integrated fuse, the Guidance Integrated Fuzing (GIF) technology and Multi-Role Responsive Ordnance Kill Mechanism (MRROKM).

Meanwhile, after producing over 3,000 missiles, Raytheon is preparing to shift its AIM-9X production to the more advanced ‘Block 2’ variant, which adds a ‘one way’ datalink, enabling the launching aircraft to update the missile with up-to-the-second target location, enabling the pilot to launch AIM-9X before the missile’s imaging IR seeker ‘locks on’ the target. This procedure extends the missile’s range and maneuverability to the maximum kinematic envelope of the missile. The missile is currently undergoing flight testing, to be followed with qualification tests on all platforms including F-16, F-15 and F/A-18. With Lock-On After Launch capability confirmed, AIM-9X could be cleared for the F-22 Raptor and F-35 Lightning II fighters. These stealth fighters are currently limited to carry only LOAL missile, since the weapons cannot acquire targets when stationed inside the weapons bay.

Modern weapons are no longer compared on the size and power of their warheads. In a world where illusive targets take cover amongst innocent civilians, and friendly forces are located across the street or behind a wall, the smaller, more “surgical” effect a weapon has is better. To successfully engage targets under such restrictions, an attack should be pursued swiftly as soon as a target is exposed and while nearby friendly forces and non-combatant elements are least vulnerable. A range of such new weapons were on display at this year’s airshow. 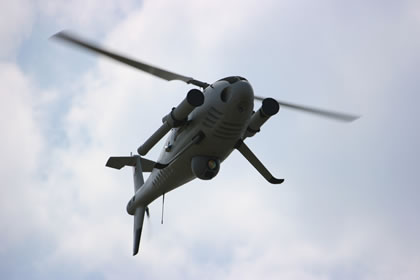