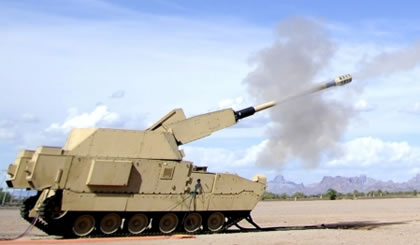 The US Army’s future self propelled gun – the ‘Non-Line-of-Sight Cannon‘ prototype (NLOS-C/P1) fired the first round at the Yuma proving grounds. The vehicle will fire an additional 500 rounds through early 2009 to obtain a safety release that will allow soldiers to move, shoot, and communicate from an NLOS-C in spring 2009.

NLOS-C is the lead prototype in the Army’s family of eight FCS Manned Ground Vehicles (MGVs). The new cannon implements automated ammunition loading system and improved accuracy through on-board projectile tracking coupled with the power of the FCS network and sensors. It is operated by a crew of two soldiers. “This marks the first 155mm round fired from a fully automated howitzer mounted on an FCS hybrid-electric chassis and remotely commanded through its on-board computers and controls,” stated Lieutenant Colonel Robert McVay, Army Product Manager for NLOS-C.

It will be one of nine vehicles to be produced under the system development phase. As the system is approved for operational testing, more vehicles will be produced for the testing, overall, the Army’s Evaluation Task Force (AETF) will receive 18 NLOS-C platforms starting in 2010. The AETF will put the NLOS-C through combat scenarios to provide lessons learned that will be used to enhance and finalize the design for the final production NLOS-Cs and the rest of the MGV family.