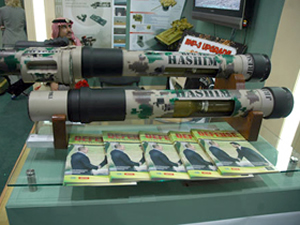 Bazalt, the Russian developer and manufacturer of the RPG is planning to introduce a new multi-purpose rocket grenade by 2010. The new RPG-32 “Hasim” weapon is equipped with reusable collimator based optical sight, effective up to a range of 700 meters.

A night sight can also be used. The disposable round comprises a rocket stored in a sealed launcher-container. It is designed for optimal use at short to medium range (350 – 400 m) offering up to 80% hit probability. The warhead, comprises a 105mm caliber tandem anti-tank capable of penetrating 650mm of steel armor (behind reactive protection) or 72mm multipurpose (fragmenting high explosive thermobaric) warhead, designed to defeat buildings, fortifications, light armored targets.

The company is negotiating with Jordan to set up a joint venture to produce rocket-propelled grenade launchers in the Middle East. Vladimir Korenkov, general director of the state enterprise Bazalt. Jordan has been involved in the development of the weapon’s launcher since 2005; as the system enters production, complete weapons will be locally assembled from parts delivered from Russia.