“This is a rugged electric laser with power levels, beam quality and runtime suitable for offensive and defensive military utility” said Dan Wildt, vice president of Directed Energy Systems for Northrop Grumman’s Space Technology sector. “The Firestrike laser power per cubic foot has been greatly enhanced from its successful laboratory predecessors.” The new 15kW Firestrike laser produces beam quality 1.5 times the diffraction limit. Laser activation is accelerated to meet weapon requirement – aimed for precision attack utilizing the low power (100 watt alignment beam, Firestrike turns on from zero to full power in less 500 milisecond and could continue to burn the target as long as power and coolant are provided. As depicted in the drawing above, several Firestrike lasers can be stacked to provide a 100kW weapon-class laser that could weigh about 1.5 tons and require half a megawatt of power.

Wildt noted the new laser has been hardened for military uses but also was designed with life-cycle costs and reliability in mind. Northrop Grumman believes that the new product will form the backbone of future laser weapon systems. 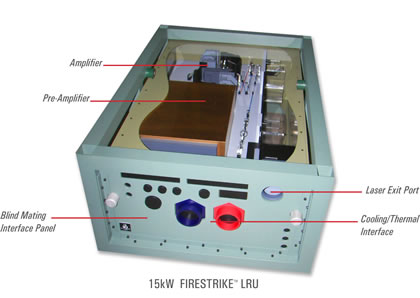