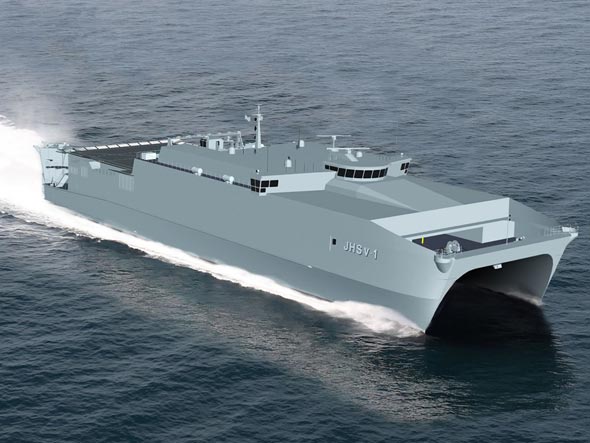 Awarded $185 Million contract to Mobile Alabama based shipbuilder Austal USA for the construction of the lead vessel. The 10 ship program has a potential value over $1.6 billion

The US Subsidiary of Australian based shipbuilder Austal was awarded $185 million contract by the US Navy, to build the first out of ten Joint High Speed Vessels (JHSV). The first JHSV will be operational by 2011. The Navy is expected to orders nine additional JHSV ships by 2013, representing a potential value of up to $1.6 billion – the largest in Austal history. General Dynamics’s Bath Iron Works was one of two other companies competing for this lucrative program.

Austal USA was selected as prime contractor for the 103 meter long JHSV. General Dynamics Advanced Information Systems to design, integrate and test the JHSV electronic systems, including an open architecture infrastructure, internal and external communications, electronic navigation, aviation and armament systems. Similar to the Austal-built ‘WestPac Express’ operated by the US Marine Corps since 2002 JHSV will be capable of transporting troops and equipment in support of rapid deployment military operations and humanitarian relief efforts. The vessel is optimized for operations in shallow waters and can reach speeds in excess of 35 knots fully loaded. The ships will include a flight deck for helicopters and a ramp allowing vehicles to quickly drive off the ship. Although it will be operated by the Navy, the program is jointly funded by the two services as it is destined to support both Army and Marine Corps operations.

Austal USA plans to construct the ten JHSV vessels at its US based shipyard located in Mobile, Alabama, where work is continuing on the first phase of a new state-of-the-art Modular Manufacturing Facility (MMF). Upon completion in mid-2009, the first half of the 70,000 m2 MMF will be available for the fabrication of all JHSV modules. Austal is currently completing the US Navy’s 127 meter Littoral Combat Ship “Independence” (LCS 2). This vessel is being prepared for sea trials by early 2009. Despite the difficulties encountered earlier in the program, the need for a future 55-vessel LCS program is still valid, as part its 313 ship fleet. Austal is hopeful that this support could be translated into an order for a second LCS vessel by early 2009.