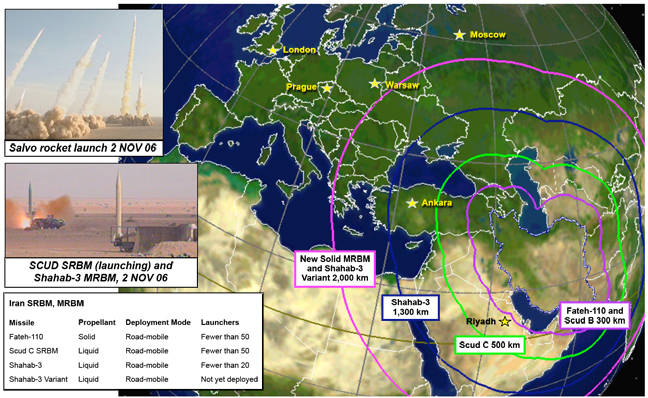 Iran claims its newly demonstrated solid-fuel powered ballistic missile has a range of 2,000 km. What benefits Iran can have with the new solid-fuel technology?

Iranian defense minister said the the two-stage missile uses combined solid fuel contributing to accelerated launch procedurewith a range of about 2,000 kilometers (The oputer ring in the map shown above depicts the reach of the new missile).

If true, such claims would signify meaningful developments in Tehran’s missile program and could impact U.S. ballistic missile defense efforts in Europe. While the Shahab-3 can already reach parts of southern Europe, it poses the greatest threat to points in the Middle East including Israel, US military bases in the region, Turkey and Russia (the missile could hit almost as far as Moscow and Warsaw). A solid fuel missile could reach out much further, endangering larger areas in Europe than the former missile could attain. The claim itself, however, could also have ramifications for U.S. ballistic missile defense (BMD) efforts in Europe as U.S. President-elect Barack Obama considers his options. The Russian president has already opened his gambit on election day, when he warned to deploy his Iskander-M ballistic missiles to the Kaliningrad Region, in response to the planned US anti-missile defense in nearby Poland.

In the past, Iran has often boasted of developing new weapons systems only to be met with skepticism from Western defense analysts. Iran has been making claims about solid propellant for years, which always proved fabricated. During a high profile military parade in Tehran, last year, Iran claimed to have developed the “Ashura” , a 2000km range missile using solid fuel technology. They never repeated this claim, however.

But Uzi Rubin, an expert on missiles who used to be among the Israeli Defense Ministry’s senior most authorities in the missile field, said the new weapons could attest to the existence of “an impressive technological capability” in Iran.

The Iranian missile program has long centered on the medium-range Shahab-3, a single-stage, liquid-propellant ballistic missile. A multistage solid fueled balistic missile needs highly sophisticated technology, compared to the liquid propelled system. Thus, if defense minister Najjar’s claims about the latest test will prove legitimate, it could indicate that Iran has made significant advances in both staging and the application of solid propellant to strategic missile technology.

Basically, chemical rockets and missiles are of two primary types: those that use liquid fuels and those that use solid fuels. The most familiar type of liquid rocket is one in which liquid oxygen is used to oxidize liquid hydrogen. In this reaction, water vapor at very high temperatures (about 2700°C, or 4,900°F) is produced. The water vapor is expelled from the rear of the rocket, pushing the rocket itself forward. The liquid oxygen/hydrogen rocket requires an external source of energy, such as an electric spark, to initiate the chemical reaction. Some combinations of fuel and oxidizer, however, ignite as soon as they are brought into contact. Preparing liquid fueled missiles for launching presents a highly dangerous, life-threatening process. The launching process alone takes about 90 minutes to fire the first missile, which is crucial, if the location is under constant satellite surveillance. Moreover, the entire process must be performed outside the underground shelter, as the fuel liquid is highly toxic to the handling crew, which must also wear cumbersome protective gear. An example is the liquid combination of nitrogen tetroxide and monomethylhydrazine. These two compounds react with each other spontaneously to produce a temperature of about 2,900°C (5,200°F).

From a tactical point of view, liquid-fuel rockets have a number of clear advantages. First, they can be turned on and off rather simply (at least in concept) by opening and closing the valves that feed the two components to each other. Also, they tend to provide more power than do solid rockets. Finally, when problems develop in a liquid-fuel rocket, they tend to be less serious than those in a solid-fuel rocket.

A serious disadvantage is that the liquid components often require very special care and that liquid fuels must be added to a rocket just before its actual ignition since the components cannot be stored in the rocket body for long periods of time. Finally, the mechanical demands needed for the proper operation of a liquid-fuel system can be very complex and, therefore, subject to a number of possible failures. As mentioned, the prime disadvantage of the liquid fueled missile is it’s vulnerability to attack, before it is actually launched. Modern satellite surveillance and rapid reaction pre-emptive attack by loitering unmanned aerial vehicles can destroy the missile during it’s preparatory process, which can become disastrous, if non conventional warheads are used.

In a solid-fuel rocket, or missile, the fuel and oxidizer exist in the solid, rather than the liquid, state. The combination of fuel and oxidizer, along with a binder to hold them together, is called the grain. The grain usually has a claylike texture. When ignition occurs, the oxidizer reacts with the fuel to produce hot gases that propel the rocket in the same way as with liquid rockets.

Many combinations of materials have been used for the grain in a solid-fuel rocket. One common mixture consists of powdered aluminum metal as the fuel and ammonium perchlorate or ammonium nitrate as the oxidizer. The flame produced by the reaction between these two substances has a temperature of at least 3,000°C (5,400°F). Nitroglycerine in combination with easily oxidizable organic compounds is also widely used. Such combinations have flame temperatures of about 2,250°C (4,100°F).

A major advantage is of course it’s higher survivability against pre-emptive attack, as it does not require the long-period pre-launch preparation outside the underground shelter. Moreover, a solid-fuel rocket can be fueled a long time in advance of a launch without much danger of the fuel’s deteriorating or damaging the rocket body. It can therefore be stored in well protected and obscure subterranean concrete shelters evading satellite surveillance. Finally, the fuels themselves in a solid-fuel rocket tend to be safer and easier to work with than those in a liquid-fuel rocket.

Still, solid-fuel rockets also have their own drawbacks. Once the fuel in a solid-fuel begins to burn, there is no way to slow it down or turn it off. That means that some of the most serious accidents that can occur with a rocket are those that involve solid-fuel combustion getting out of control. Whatever the case may be, if Tehran has indeed mastered multi-stage and solid fuel technology for its missile arsenal, than this would certainly mark an impressive advantage and issue a clear warning to the West to prepare an effective countermeasure in time.